The network improvement project aims to support the environmental condition of the River Kennet and reduce groundwater abstraction by an average of 4.5m litres per day, thanks to the installation of a new pipeline between Tilehurst and Cold Ash Service Reservoir, near Newbury, via Thames Water’s existing water booster station in Bradfield.
The project began on site in January last year and Optimise later completed installation of the pipeline with the entire scheme due to be handed over to Thames Water at the end of 2013.
The pipeline follows the route of the M4 motorway and involved directional drilling under the main carriageway, along with another major road, three crossings of the River Kennet and several minor roads and tracks. GPS supplied SDR11 and SDR17 355mm pipe to address variations in water pressure along the route, which ranges from 4 bar to 11-12 bar after the pumping station. The SDR11 pipe was used for directional drilling where additional pipe strength is required for this type of installation. GPS also supplied bespoke transition pieces to accommodate multiple changes in pipe wall thickness and SlimFlange adaptors for connections to metal gate valves. The use of SlimFlanges meant that 300mm valves were used as opposed to 355mm had standard stub flanges been used. This afforded considerable cost savings for the overall project. Lengths of pipe were butt-fused together in order to create the 19.2km pipeline, maximising the welded length whilst minimising mechanical joints. Once operational, the new pipeline will provide an additional potable water supply route for Newbury. 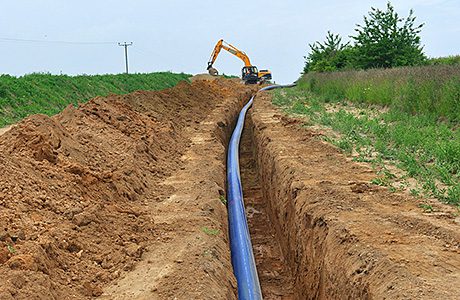