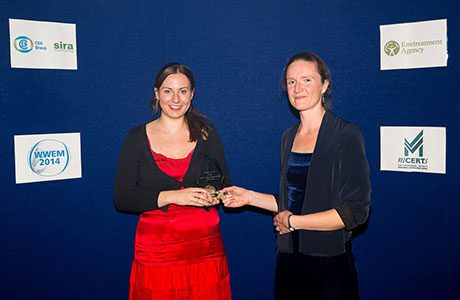 WELL diamonds are certainly hard wearing, and in the case of a new water sensor under development, this property is being harnessed for monitoring heavy metals in lakes, rivers and other harsh aqueous environments.
Research by Zoe Ayres at the University of Warwick into the use of a boron-doped diamond (BDD) electrode to detect and quantify heavy metals in aqueous environments has won the SWIG 2014 Early Career Researcher Competition. The BDD makes an ideal electrode material for electrochemical x-ray fluorescence because of its superior electrochemical properties as well as its x-ray transparency. The novel method under development is cheaper and simpler than the alternatives and shows huge potential.
Zoe Ayres won the first prize for the 2014 SWIG Early Career Researcher Competition, and was presented with a trophy and cheque for £1,000 during the gala dinner at WWEM 2014, where she had earlier presented her research in the poster exhibition area entitled ‘Heavy metal detection in aqueous environments’.
SWIG is a not for profit knowledge exchange and networking organisation focused on the use of sensor and associated technologies for use in areas like the water industry (www.swig.org.uk).