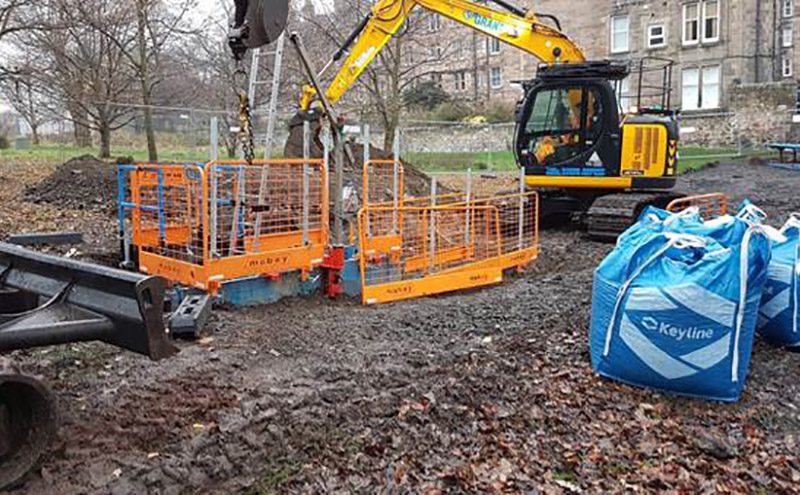 The project took place over 6 weeks. It involved working at a depth of 4 metres on sewers up to 1.8 metres tall within the ancient grounds – overlooked by nearby Holyrood Palace, the official residence of the Monarchy in Scotland for centuries.

The work was carried out to support the development of a new four-star 90-room hotel in historic Market Street on a site which has lain derelict for the past 50 years. There had been major concerns about the risk of sewer flooding due to a lack of sewer capacity in the area which is on the tourist trail.

Meticulous planning and close collaboration were vital for the success of the project, according to SWH. The team had to work in close partnership with the custodians of the park, the government cultural agency Historic Environment Scotland.

Independent site surveys, reports and regular ongoing meetings were key to enabling approval for the work to go ahead including from Scottish ministers who gave the green light to work at the historic site popular with locals and tourists. It also serves as a prolific location for the start of marathons and charity events such as the annual Moonwalk.

With this being such a popular area, pedestrian access and a high quality reinstatement was a top priority. During construction a temporary footpath was laid to help pedestrians navigate around the works. Following completion, a brand new 250-metre pathway upgrade was carried out.

Working in such an ancient site, there was every possibility the team from McKenzie Construction might happen upon artefacts of a bygone era. Operating under the watchful eye of archaeologists, the team went to great lengths to ensure the job was done sensitively and nothing was disturbed, tapping into a deep well of experience within Scottish Water Horizons.

Evidence of human settlements going back some 10,000 years including cultivation terraces, rig and furrows believed to have been made by medieval farmers have previously been unearthed in the park and more recently there was evidence found of quarries used in the 18th century.

Stewart Imrie, project manager at Scottish Water Horizons, has over 40 years of experience working on projects throughout Scotland. He said: “This sewer work will help the Capital’s tourism industry to flourish by providing much needed capacity in its waste water infrastructure.”

“I am delighted to see this project completed on time, on budget and without issue or complaint. Working in such a sensitive area is always a challenge and by working closely with Historic Environment Scotland, our clients and the community, we have been able to deliver a simple solution to a long standing problem.”

Alan Keir, from Historic Environment Scotland, praised the collaborative approach taken by the project team. “They were a great team who worked very closely with us to ensure it was a project with no hassles. My job would be a lot easier if every client and contractor was as organised as Scottish Water Horizons and Mackenzie Construction.”

Detecting leaks before they occur

Pressure is on for hydrostatic pipeline testing