Every plant and every perfume must have its own individual chiral hallmark. Using their new approach, the research team has been able, for the first time, to identify chiral compounds within complex mixtures of gases with a high level of sensitivity and in real time.

Professor Jonathan Williams of the Max Planck Institute for Chemistry (MPIC) – which also contributed to developing the approach – said the technique will “make it possible for us to decode chiral signals in the air around us, enabling us to better understand the chemistry of the atmosphere.” The cooperating partners have already applied for a patent for the technique.

Natural vs synthetic odours
Chirality is a fundamental property of nature. Our right and left hands are a manifestation of it. Simarly, several biomolecules exist in two mirror-image forms that cannot be superimposed upon one another – in the same way that a right hand will not fit in a left-handed glove. This can affect the bio-chemical activity of these molecules.

A unique example is the emissions of plants. These contain several chiral compounds that are naturally present in both chiral forms, the D- and L-isomers or enantiomers. A prominent example is the chiral molecule pinene, which is responsible for the characteristic scent of conifers and pines. The relative ratios of the two enantiomers of pinene naturally vary in the emissions of such plants, but they critically depend on the state of health of the plant.

The same principle applies in the case of complex blends of natural and synthetic components, as in the case of perfumes. Any chiral ingredients will occur in both the D- and L-isomers but in differing relative quantities, depending on whether these originate from natural sources or from synthetic ones.

As it is often the case that natural components are replaced by synthetic substances in fake or counterfeit perfumes, fake perfumes will have a chiral signature that differs from that of the originals.

The method
The researchers have developed a cavity-enhanced polarimetric method for optical chiral analysis. They were able to detect the differing optical rotation effects of chiral molecules under polarized light. For this they transferred a sample of a plant or perfume scent to a small chamber which they exposed to polarized light.

They then used a novel chirality-sensitive optical polarimeter to measure precisely and accurately the induced rotation of the polarized light. The researchers have been able to achieve a sensitivity that is better than that of the current state-of-the-art equipment by several orders of magnitude.

“Our new chiral-analysis approach provides us with precise results, faster and at better sensitivities than traditional techniques, without the need for any calibration before each measurement run. Additionally, our technique has been combined with gas chromatography for the first time to separate the individual components in a complex mixture. As a result, the chiral form of each constituent present in a complex blend of gases can be directly and accurately identified,” explained Bougas.

Taking a young coniferous plant, the team was able to show that the chiral signature of the plant’s emissions suddenly changed as soon as the plant was damaged. Similar chiral signatures have already been observed in plants subject to drought or disease. These signatures can be employed in practice, for example, to continuously monitor crop plants and trigger an alarm if these are infested by insects, suffer from a shortage of water, or become unhealthy. 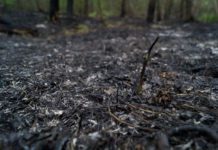