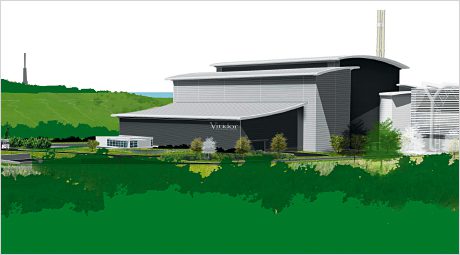 CONSTRUCTION of a £200m energy from waste (EfW) facility in Scotland is expected to begin in 2013 after Viridor won permission to normalise waste reception criteria at the consented site.
The move follows the 2010 decision by Scottish Ministers to back proposals for the 300,000 tonne energy from waste facility at the rail-linked Oxwellmains site in East Lothian. The consent had previously featured inclusion of a waste reception catchment area condition.
The facility will link with Viridor’s network of £100m Scottish recycling-led waste infrastructure and proposals for a further £450m of ‘next generation’ green technology, transforming post-recycling waste into a renewable energy resource.
While planning approval and licensing have been secured, in February Viridor consulted local residents on plans to bring the development into line with fresh guidance from the Scottish Government and SEPA which recognised the inappropriateness of artificial restrictions on where waste could be sourced within Scotland.
Also, it reflected long-established practices north of the border.
Specifically, the Scottish Environment Protection Agency guidance states: “This means that it is acceptable for any waste arising from any location within Scotland to be treated in any waste management facility proposed within Scotland.”
Colin Paterson, Viridor’s Scottish regional director, said: “It [the decision] marks an important step in the programmed delivery of advanced technologies across Scotland which aligns with waste reduction, re-use, enhanced recycling and recovery of renewable energy from what remains.”
Development is likely to last three years.
In July, Viridor officially started work on a £45m EfW plant in Exeter which is due to open and begin accepting waste from summer 2014.
The plant will process 60,000 tonnes of household waste from Exeter and its surrounding area and deal with around a third of the county’s residual waste after recycling and composting has taken place.

Image – The plant will be built at an established rail-linked site in East Lothian.