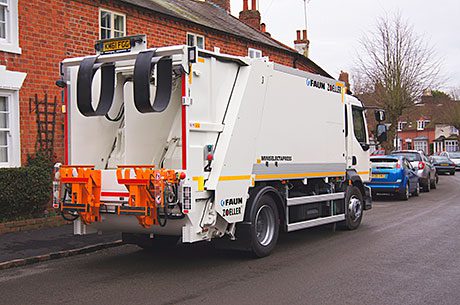 Faun Zoeller, one of Europe’s largest waste management systems manufacturers, is targeting the market with RCVs capable of picking up different types of waste on the same round.

The move is a response as councils move away from unsorted waste collection.
“We’re increasingly seeing a joined-up approach as councils look to raise their recycling efforts and minimise the amount being sent to landfill through multi-purpose refuse collection,” said Marshall Fleming, UK sales director.
“We’ve developed several of these RCVs for the European market place in the past few years.”
The company is marketing its Selectapress vehicle with a compartmentalised body capable of accommodating two different waste streams at the same time. Divided lengthways, the RCV provides the operator with flexibility with either a 50:50 or 70:30 divide.
“Which option to go for should be decided by reviewing historic waste disposal and recycling records and calculating the average weight per household,” explained Fleming.
“Councils should bear in mind that dry recyclables are bulkier than residual waste and will require more space, so may need a bigger allocation.”
For congested urban areas, the company is promoting a more compact version – the Mini Selectapress – which has a reduced width of 2.3 metres on its predecessor and a smaller turning circle. It has been specifically designed to operate in built-up, pick-up areas.
While many councils have already adopted multi-purpose collection programmes, Faun Zoeller believes more local authorities will be forced to adopt the model as they come under increasing pressure to cut costs.

Image – The Mini version is for use in built-up areas.