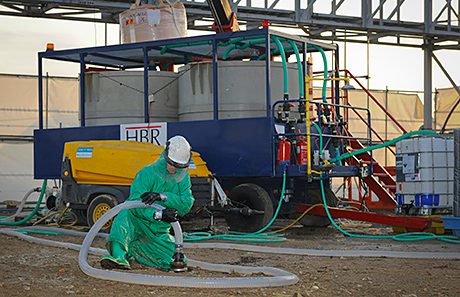 REMEDIATION expert HBR has developed a mobile rig for in-situ chemical injection work. The unit has been used on a major remediation project in the Midlands.

Development of the rig was prompted by the perceived need for a faster oxidation solution, something HBR identified during its involvement in remediation projects across the UK involving pharmaceutical, chemical and gas works sites. The team built a prototype at the company’s site in Essex and spent two months testing the model to ensure its ability to carry out major in-situ chemical oxidation (ISCO) works.
The new unit features two large mixing tanks capable of injecting up to 50 m3 a day of prepared oxidant solution – a much faster solution than alternative equipment on the market, claims the company. The mobile nature of the rig also makes it easier to manage and move into position while on site, says HBR.
Technical manager James Wilson explains: “We are extremely pleased with the rig’s flexibility and operating capacity and, on the Midlands project, we reduced the injection works period by over 40 per cent compared with previous technologies. This has a big impact on labour and plant costs, enabling us to offer added savings to existing and future clients.”
The mobile mixing unit will be used by HBR at other sites, and the company has secured a sizeable hire contract with another remediation contractor for Spring 2013. Other companies have also expressed interest in hiring the unit.

Mangroves are environmental guardians of the coastline, says research