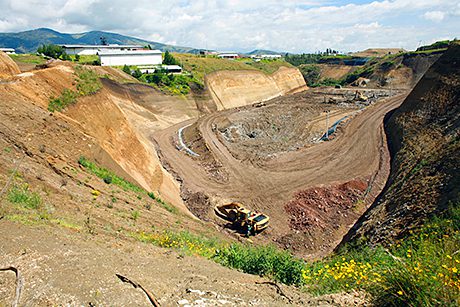 A recent trial carried out at a landfill site in the South West of England addressed the problem of how to remove a number of heavy metal contaminants. With this application it was the levels of chromium that particularly concerned the operator. This article, drawing on conversations with remediations expert Virotec Europe, looks at some of the considerations that guided the choice of binding media, and its mode of deployment in a pilot study.

AT the time of Virotec’s initial involvement, the landfill leachate created on the site was undergoing treatment via a Sequential Batch Reactor (SBR) before being discharged to the local watercourse via reed bed.

The quality and quantity of that discharge was being monitored and regulated to meet the requirements of an Environmental Permit. The conditions of such permits are regularly reviewed by the EA. One such review had raised concerns about the quality of treated leachate discharged to the river; in particular, the concentration of metals in the discharge.
As part of a long term strategy to improve the quality of leachate discharged the company looked at various technology options for possible inclusion in an upgraded Leachate Treatment Plant (LTP) with improved metals-removal capability.
One option was the use of environmental media to bind the metals to ensure they couldn’t pose a contamination threat. The choice of Virotec’s ElectroBind media was influenced by the fact that it provides a permanent binding solution, according to the company’s md Steven Young, avoiding the pitfalls of other media, such as the tendency for their binding action to fade with a drop in pH.

Powder vs pellets
Virotec Europe offers ElectroBind in both powder and pellet form. The powder can be used to form a slurry in admixture with the leachate. Subsequent settlement is then used to separate the supernatant leachate and the metal-bound media. Pellets, on the other hand, can be used to create a filter bed through which the contaminated leachate is passed. As the leachate flows through the bed, metals are absorbed and retained by the pellets resulting in a treated leachate exiting the bed with reduced metal content.
Powder is less expensive to buy and more efficient at binding contaminant metals for removal. However in this application it would have required a mechanised system, including pumps, screw augur feed and other components, which would have required monitoring by personnel on the site. With pellets, deployment of the media can be accomplished by simply digging a concrete bed to hold the pellets. Apart from the initial capital expenditure, there are no other costs until the bed has to be replaced, and this approach doesn’t require human supervision. A constraint of this application was the need to avoid occupying on-site personnel with anything other than landfill operations.
Prior to making a decision to deploy the media, a trial was conducted in which the pellets were deposited within two Integrated Bulk Containers (IBCs) of 1m3 capacity. These were deployed in series as simple filtration tanks. The manual valve at the base of each container allowed an upward flow regime to be imposed within the filter. “If it’s just a tank with a load of pellets in it then water will tend to find the quickest way through. So you can put in baffles, for example, to make it go through more of the pellet material,” said Young.
The pellets took up about 80% of the available volume of each IBC, leaving a space above the filter which could be occupied by treated leachate.
The project team decided the best place for leachate sampling was at the point where material left the SBR settlement tank, immediately downstream of the reactors. Volumes of treated leachate were removed from the tank by a submersible pump and discharged into the pilot-scale filters. As there was a risk that untreated solids could also be removed from this tank by the pump, two further empty IBCs were installed in series, upstream of those containing the media, to act as flow balancing and solids-removal tanks.
After passing through the pilot-scale filters, the treated leachate was returned to the LTP, using a final IBC containing a submersible pump.
The team designed a sampling and analysis programme to produce data on the performance of the pilot-scale filters. The pilot-scale plant ran for a period of two weeks and, once commissioned, samples were taken on six occasions, allowing appropriate changes to be made to the plant at the same time. Leachate was expected to remain within the ElectroBind filters for around one to eight hours.
Flow pumped from the SBR settlement tank was adjusted using valves arranged to meet this requirement. Changes in the level of leachate within the settlement tank as the treatment sequences progressed made it difficult to obtain consistent flow rates but a lot of time was spent getting an optimal flow rate onto the filters.
Spot samples of leachate were taken from the feed, filter 1 and filter 2 sampling points and submitted to an accredited laboratory for analysis of various parameters, including pH and the presence of a range of contaminants including chloride, arsenic, cadmium, chromium, copper, iron, mercury, nickel, zinc and potassium.

Results of the pilot study
The most significant reductions in the concentrations were noted for iron, zinc, lead and potassium. Noticeable reductions were also observed in the already low concentrations of arsenic, chromium, copper, and nickel in the same leachate.
A key observation during the trial related to the effect of the media filter on treated leachate colour. The colour of the leachate was significantly reduced as it passes through the two filters.
The study showed a clear increase in the chloride concentration of the leachate as it passes through the two filters, arising as a result of the way this kind of media is manufactured. This is normally washed out of the filter over a period of time, and so this kind of washing would be a necessary element in any full-scale system.
The pilot study confirmed that ElectroBind media in pelletised form would be suitable for use in a leachate treatment process to reduce the concentration of metals. An additional benefit apparent from this trial is that the media significantly reduces the colour of leachate.
Using a full scale filter as part of the leachate treatment process would need to incorporate a means of washing to ensure that a significant percentage of the chloride salts remaining from the pelletisation process are washed from the media. The unit would also need to be protected from the risk of solids entering and blocking the interstitial spaces within the filter. Once set up, this filter would need little in the way of operations and maintenance interaction from site staff.

Mangroves are environmental guardians of the coastline, says research