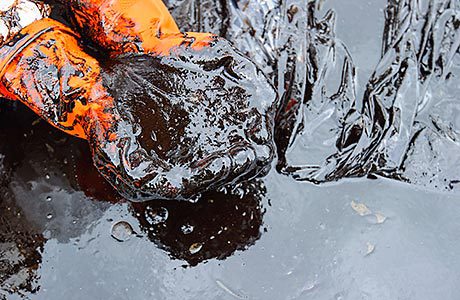 DEALING effectively with oil and chemical spills could be made easier with the help of an improved form of aerogel developed at the University of Wisconsin-Madison.

The patent-pending technology is the work of a team led by Shaoqin “Sarah” Gong, a researcher at the Wisconsin Institute for Discovery’s Bionates research group and associate professor of biomedical engineering.
Aerogels, which are highly porous materials and the lightest solids in existence, are already used in a variety of applications, ranging from insulation and aerospace materials to thickening agents in paints.
The aerogel prepared in Gong’s lab is made of cellulose nanofibrils (sustainable wood-based materials) and an environmentally friendly polymer. Furthermore, these cellulose-based aerogels are made using an environmentally friendly freeze-drying process without the use of organic solvents. But it is the performance of the material that really sets it apart, says Gong.
“For this material, one unique property is that it has superior absorbing ability for organic solvents — up to nearly 100 times its own weight,” she says.
“It also has strong absorbing ability for metal ions.”
Treating the cellulose-based aerogel with specific types of silane after it is made through the freeze-drying process is a key step that gives the aerogel its water-repelling and oil-absorbing properties.
“So if you had an oil spill, for example, the idea is you could throw this aerogel sheet in the water and it would start to absorb the oil very quickly and efficiently,” she says. “Once it’s fully saturated, you can take it out and squeeze out all the oil. Although its absorbing capacity reduces after each use, it can be reused for a couple of cycles.”
In addition, this cellulose-based aerogel exhibits excellent flexibility as demonstrated by compression mechanical testing.
Though much work needs to be done before the aerogel can be mass-produced, Gong says she’s eager to share the technology’s potential benefits beyond the scientific community.
“We are living in a time where pollution is a serious problem — especially for human health and for animals in the ocean,” she says. “We are passionate to develop technology to make a positive societal impact.”
Gong and her colleagues have featured their findings in the Journal of Materials Chemistry.