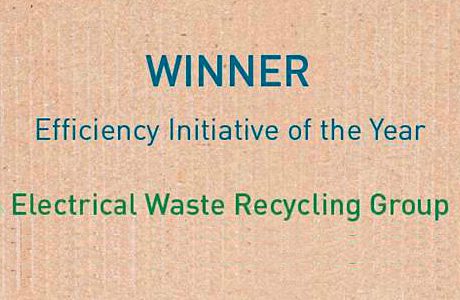 A recycling plant in Huddersfield has announced their win of a prestigious award- “Efficiency Initiative of the Year” among some of the industries largest players.

The Electrical Waste Recycling Group which has treatment facilities in Huddersfield and Glasgow and also operates from locations in County Durham, Essex and Bristol picked up the award at the National Recycling Awards in London as well as gaining recognition for “Innovation of the Year (Equipment)” and were given a ‘Highly Commended’ award in the category for the “Resource Management Business of the Year.”
The most recent win for the company comes after their December launch of it’s World’s First Flat Panel Display automated process at their site in Huddersfield which has resulted in a significantly increasing number of enquiries and general interest in the site.
With an increase in business, this has allowed the company to generate further opportunities for the sites local communities who currently have five apprentices with the view to take on more in coming months.
One apprentice at the Huddersfield site Aiden Cockcroft said “‘I am proud to work for an organisation that excels in the recycling sector. The Recycling Efficiency Initiative Award is a fantastic achievement for such a unique company. The award could not come at a better time for EWRG, after the recent milestone achievement of being the world’s first to mechanically depollute flat panel display units. This award gives EWRG an even greater confidence boost, enabling us to once again increase our potential.’
For further information on this ground breaking facility contact either their MD at keith@electricalwaste.com or call him direct on 07831 429 175.