An international team of researchers has demonstrated a way to assess the quality of water on Earth from space by using satellite technology that can visualise pollution levels otherwise invisible to the human eye through ‘Superhero vision’.
The research team from the University of Leicester, the Hungarian Academy of Science and industrial partners has used the MEdium Resolution Imaging Spectrometer (MERIS) instrument hosted on the satellite ENVISAT to measure pollution levels in lakes on Earth through ‘Superhero vision’, allowing it to see wavelengths invisible to the human eye, which only sees red, green and blue light. 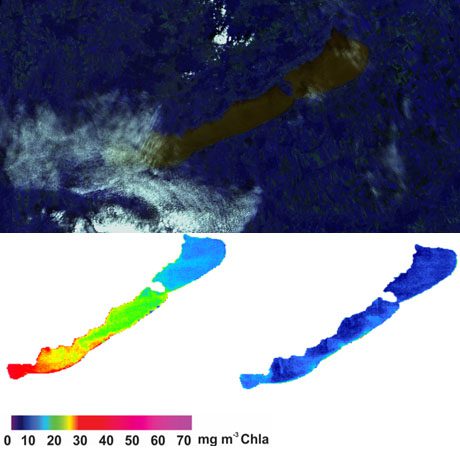 While these methods have previously been used for seas and oceans, they are not readily available for lakes, especially shallow lakes with complex optical environments defined by a mix of different natural substances in the water.
University of Leicester PhD student Stephanie Palmer, who worked in Hungary at the Balaton Limnological Institute of the Hungarian Academy of Sciences for three years, analysed ten years of data from the European ENVISAT satellite in the search for specific chronological sequences describing algal blooms.
Lake Balaton in Hungary is a popular tourist area especially vulnerable to environmental and meteorological changes that could result in the build-up of algae.
Professor Heiko Balzter, Director of the Leicester Centre for Landscape and Climate Research in the University of Leicester’s Department of Geography and co-author of the study, said: “Lake Balaton is incredibly important for the Hungarian tourism sector, since on an annual basis up to 1 million tourists are visiting it. It is also home to a large diversity of fish and other species. When water quality samples are taken from a ship it is not only a logistic nightmare, but the data collection costs a lot of money and only provides point measurements, making the estimation on the whole lake level very speculative.
“The frequent satellite data of MERIS adds a synoptic observation to the study of algal blooms and how they develop.
“Leonardo da Vinci said that ‘Water is the driving force of all nature’. There is a lot of truth in that. Clean water is the basis of human life, and while we are used to turning the tap on and having unlimited access to clean drinking water here in the UK, this is not the case for everyone in the world.”
When algae grow in lakes they contain the green substance ‘chlorophyll-a’ which is measured at the Balaton Limnological Institute at Lake Balaton with a research ship.
During the research, which was supported by the European Commission, Marie Curie Programme and the GIONET project (European Centre of Excellence in Earth Observation Research Training, grant number PITN-GA-2010-264509), over 1,000 satellite images were processed at the satellite data analysis centre of Airbus Defence and Space based in Farnborough. They were turned into maps of the green chlorophyll concentration in the water, and their quality checked with over 250 ship-based measurements taken over 5 years.
Viktor Tóth, research fellow of the Balaton Limnological Institute, added: “It is incredible that such ecological differences occur within one given lake and this makes Lake Balaton so special and suitable for remote sensing projects. The work of Stephanie Palmer has proved that with proper calibration remote sensing is a valuable tool not only for water quality assessment but also for algologists.”
The study, ‘Validation of Envisat MERIS algorithms for chlorophyll retrieval in a large, turbid and optically-complex shallow lake’, is published in the February edition of the top-rated remote sensing journal Remote Sensing of Environment, Volume 157, Pages 158–169. It is open access and free of charge to access.
A second paper, ‘Satellite remote sensing of phytoplankton phenology in Lake Balaton using 10 years of MERIS observations’, outlines a satellite remote sensing approach to retrieving and mapping freshwater phytoplankton phenology in application to Lake Balaton, Hungary.