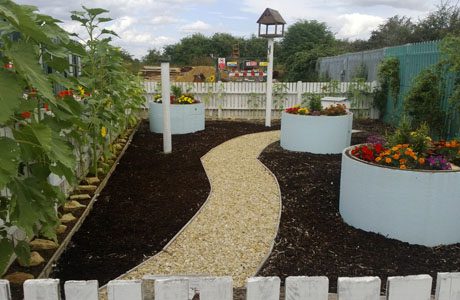 CONSTRUCTION and engineering firm J. Murphy & Sons Limited (Murphy) has won an environmental award for an eco garden at the firm’s depot at White Waltham in Berkshire.
The novel project, which reused surplus construction products to provide a habitat for wildlife including endangered honey bees, picked up a bronze award for environmental best practice at the Green Organisation’s Green Apple Awards at a ceremony held in late November at the Houses of Parliament.
The creation of the eco garden is just one scheme that fits with the firm’s ongoing sustainability goals. Not only is the scheme promoting biodiversity but it is also maximising the way waste products are used.
The attractively landscaped area in a disused part of the depot features flowerbeds made from old concrete pipe sections, a bird box made from waste timber and a bench crafted from a tree trunk from tree clearance work. Other surplus products used include left-over shingle for the path, as well as paint and topsoil.
The bees for the eco garden colony were given a new home in White Waltham, having moved from their long-established hive at Murphy’s head office in Kentish Town, London.
Murphy’s environmental manager, Barry Ryan, who led the project, said: “The idea to create the garden expanded on our continuing work to support the UK’s declining bee population. The project was the result of a lot of effort from volunteers on the site and we are delighted to receive this award.”
A six-strong volunteer team from the depot took around three months to complete the garden, including building and painting fencing to protect the area using wooden pallets.