IT almost sounds like the random suggestion of an improvisational comedian, but no, it seems real enough. A high profile campaign running for three days from 15 March is employing a team of ten pigeons, each wearing a backpack equipped with a sensor for NO2 and ozone, to fly around London and gather data about air pollution. The results are available to anyone – Londoners can tweet their location to @PigeonAir to receive the latest update for their area.

The project is the brainchild of Paris-based startup Plume Labs, which describes itself as “a technology company that helps individuals track and reduce their exposure to air pollution”, working with the support of global marketing and technology agency DigitasLBi, Twitter, and an amateur pigeon racer. 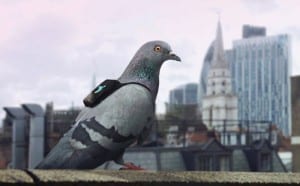 The aim of the campaign is seemingly to encourage Londoners to become beta testers for a wearable version of the firm’s “ultra-light air pollution sensing device”. A crowdfunding campaign aims to recruit 100 beta testers in London to map out live air pollutant levels across the city.

This beta test, led by a collaboration between Plume Labs and pollution researchers at Imperial College London, will help scientists run experiments looking at how decentralized pollution sensing can inform individual decision-making as well as public health and environmental policymaking. It will also be the first city-wide deployment of the company’s personal pollution tracking technologies.

The intention is that these personal wearable sensors will eventually complement Plume Labs’ flagship product, the Plume Air Report, which is described as “an urban weather forecast for air pollution”. The service tracks air pollution levels in 300 cities and 40 countries using open data, collected using a free mobile app, available on iOS and Android, which seemingly uses AI and machine learning techniques to provide live pollution forecasts and advice on what to do to avoid over-exposure to environmental factors such as UV or air pollutants.

Romain Lacombe, CEO at Plume Labs said: “Air pollution is a massive environmental health issue, killing nearly 10,000 people every year in London alone. But it doesn’t have to be this way: personal environmental trackers can help us understand our exposure to air pollution and know how to act to reduce it. We are recruiting 100 beta testers who will help scientists expriment new ways of measuring air pollution and map pollution around London — to help make the air we breathe more transparent!”

Pierre Duquesnoy, Creative Director at DigitasLBi, added: “Air pollution isn’t sexy and people don’t engage with it. So the heart of our idea was to make air pollution more accessible and relevant to people.

The Pigeon Air Patrol is a perfect example of how data combined with creative storytelling can raise awareness of a serious health and environmental issue.”