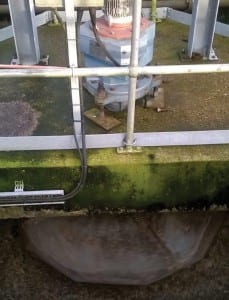 The drive was installed on a 4 kW sewage aerator at the Swallow unmanned treatment works in Lincolnshire. The vertical rotor of the aerator was set on a duty cycle of 20 minutes off, 20 minutes on. Working in this way, there were frequent sudden stops and starts that caused shock loads on the motor and gearbox, as well as needing frequent operation of the contactor to switch the motor on and off. This sometimes led to electrical and mechanical failure of the aerator, causing interruptions to sewage treatment and a possible subsequent failure to consent. This sewage treatment works has descriptive consent which specifies that all plant must be working but does not specify an ammonia limit. The middle of the aerator has a tube to pull effluent from the bottom of the tank to the top of the tank, similar to an aquarium air lift, which ensures all the content is treated. The old 20 minute duty cycle allowed detritus to settle at the bottom of the tank during the off phase, causing the tube to block over time. A solution was needed that would solve these problems and hopefully also produce energy savings by matching sewage treatment more closely to demand. Angian approached ABB, its framework partner for variable-speed drives. Following a site survey by ABB’s Authorised Value Provider, Inverter Drive Systems, an ABB machinery drive, ACS355, was recommended. The drive’s internal timer outputs signals to switch the motor on and off and to alter the frequency to achieve different speeds at different times.