The biggest wastewater tunnel ever to be built in Scotland, Glasgow’s £100 million Shieldhall tunnel is due for completion in the Summer of 2017. It combines titanic drilling machinery, subterranean and cramped working conditions, and some of the same engineering expertise that contributed to projects like the Channel Tunnel.

Commissioned by Scottish Water, the project is part of a £250 million programme commenced by the utility in 2013, to improve the city’s drainage and sewerage infrastructure – the biggest investment it has received in over a century, since much of it was built in Victorian times.

Why is it being built?

The tunnel is intended to resolve water quality and reduce flooding issues at key locations in the area served by the Shieldhall Waste Water Treatment Works (WWTW). It will support efforts to store wastewater and stormwater from heavy rainfall. This extra capacity will reduce the frequency of waste water and storm water spills to rivers like the Clyde and its tributaries, improving river water quality.

Once the titanic boring machinery reaches its destination in the city’s Queen’s Park area, the tunnel will run for more than three miles, under two major parks, at depths of up to 32 metres (105 feet), with a diameter of 4.5m – big enough to fit a double decker bus inside.

Construction of the tunnel is being tackled by the Glasgow Tunnel Partnership, or CVJV, a commercial joint venture between Costain and VINCI Construction Grands Projets, the pairing behind major engineering projects such as the Channel Tunnel – some of the same engineers will have worked on both projects.

From a construction point of view, the centrepiece of the project seems to be the tunnel boring machine (TBM) – a 1000-tonne machine described as an underground factory on rails (and wheels), and 180-metres in length – longer than 14 buses placed end-to-end. It will tunnel at an average rate of about 30 metres per day at varying depths.

TBMs from German manufacturer Herrenknecht have been used in London’s ongoing Crossrail project, one of Europe’s biggest construction projects, as well as the world’s longest railway tunnel in the Swiss Alps, completed recently. They are also being used in the Doha Metro in Qatar and an undersea highway tunnel in Hong Kong.

The project began in early 2015 and seemingly included a massive amount of preparatory work, including mining consolidation and utility diversions. A launch ceremony for the TBM took place in July 2016 at the city’s Craigton Industrial Estate, where the excavated material will be transported. Roseanna Cunningham, the Scottish Government’s Cabinet Secretary for Environment, Climate Change and Land Reform, presided over events, with the help of a 10-year-old schoolboy, winner of a competition to come up with a name for the titanic machine (‘Daisy the Driller’).

In its 13-month journey under the city, the electrically-powered TBM has been tunnelling at an average rate of about 30 metres per day at varying depths. The machine has a rotating cutting wheel at the front, with 25 cutters, which rotate as it moves forward at the speed of about two millimetres per minute. Slurry is also pumped across the rotating cutterhead.

At the rear, the machine has a series of trailers housing mechanical and electrical equipment, as well as a conveyor belt to remove earth, stones and rocks. This material will be recycled for use in other projects. The aim is to re-use everything, either in this project or elsewhere, says Scottish Water. The slurry, rocks and earth are being sent to a slurry treatment plant at Craigton industrial estate.

The engineers who spend their days and nights down there seemingly undergo rigorous training in working in confined spaces, says the utility

Life in the tunnels

The TBM is being operated 24 hours a day, five days a week by a team of up to 70 people working in shifts. At any one time, there is usually a team of about eight working on the TBM, driving or piloting it and operating equipment used to excavate material.

Another 20 support staff work behind it installing the tunnel sections (six of the concrete segments are installed to form a 1.5m-long ring) and the pipework or ducting for water and air and to transport the slurry above ground.
The support staff also use the train to bring parts, supplies and spares to the TBM.

Perhaps surprisingly, it’s work that the engineers relish, according to Scottish Water, which has released for publication comments from Tom, a 25-year-old from Birmingham: “It’s really fantastic to be working on such an important project, the first of this type and size in Scotland, which will benefit Glasgow for generations to come.

“I enjoy working in tunnels and, although it’s a challenge carrying out very technical work in these conditions, it’s one I relish and enjoy every day.

“You quickly get used to the confined space and we have everything we need down here for working long shifts – including a kitchen and toilet!

“Getting to my current ‘place of work’ is certainly quite different to what most people do every morning above ground. But I would never want a conventional office job. Building tunnels is cool and I really wouldn’t swap it for anything.”

A day below ground

One way to gain an appreciation of the scale of the project is by consideration of what’s involved in the typical working day. The engineers’ shift seemingly starts at 7am and runs until 7pm when they’re replaced by another team of men working the 12-hour nightshift. The workers follow this pattern five days a week, as the machine tunnels away, night and day.

After they arrive on site at Craigton industrial estate they receive a briefing from the shift manager, including an overview of the type of ground they will be working in, and then head for the entry point to the tunnel, a 20 metre-deep shaft.

Once they are individually checked above-ground, and given their own tally or number, they climb down four flights of metal stairs, descending into what looks like an unfinished underground railway station but is actually the entry and exit point to the tunnel and  TBM, for all men, materials and equipment.

Covered by a sound-proofing roof to minimise noise inconvenience to local residents, the shaft is a vast industrial cavern which houses a small-gauge railway and is all rolling stock, cranes, ducting and pipes.

It’s the hub of the operation, the point through which everything passes. By the end of the project, about 250,000 tonnes of excavated material will have come out this way, while more than 18,000 pre-cast concrete segments (each weighing 2.5 tonnes) will have gone in.

At the bottom of the shaft, the engineers working on the TBM board a man-rider carriage on an electrically-powered locomotive which transports them, along with the concrete segments, to the tunnel boring machine.

The locomotive also takes stretches of pipes, ducting and cable to be installed behind the TBM as it progresses slowly but steadily along its route.

In this account of a typical day working on the tunnel, an unusual detail (which Envirotec decided not to try and verify, enjoying the soulful and mystical flavour with which it imbues the tale), it seems that the workers on their way to board the man-rider pass a small encased wooden carving of Saint Barbara, the patron saint of tunnellers.

This is mounted on the shaft wall to keep silent watch over them in accordance with tunnelling tradition.

Inevitably, as the tunnelling progresses and the TBM gets further along its 3.1 mile-long route, the men’s journey will also get longer. Their ‘commute’ at the moment takes little more than 10 to 12 minutes from entry shaft to the back of the TBM.

In the final stages of the tunnelling work, when the TBM is further away from the shaft where the tunnelling began, that journey will take almost 30 minutes. 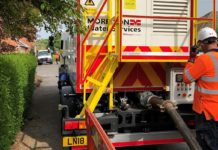