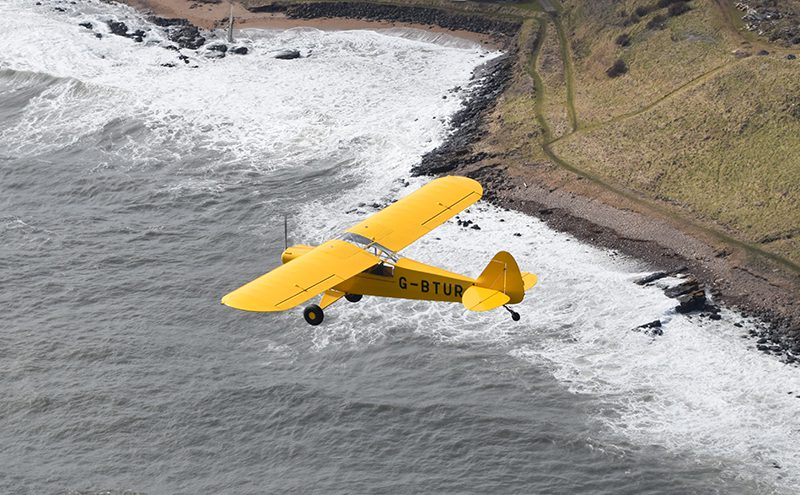 “Our pilots get a unique view of the country’s coastline. We fly sorties for many different reasons and are always dismayed by plastic contamination we see floating in our waters or landing on our beaches.

SCRAPbook is an exciting project as we hope it will raise awareness of how much litter is around our coasts and enable more to be done about removing it and preventing it from getting there in the first place. There will be seven Civil Air Patrol teams taking part who are all very excited to be joining forces with MCS and MFP on taking the battle on ocean plastics to Scotland’s skies!”

The availability of these photos to the public and beach cleaning organisers like MCS will be a game changer in directing volunteers to the parts of the coast that perhaps had not been noticed before. Catherine Gemmell, MCS’ Scotland Conservation Officer coordinates the mobilisation of thousands of volunteers around the Scottish coastline to clean up beaches and record the litter they find. But, says Catherine, there are still many kilometres of coastline that remain uncleaned.

“With nearly 10,000 kilometers making up Scotland’s mainland coast we know there are many stretches of beach that our volunteers have not been able to survey yet . SCRAPbook will enable our amazing volunteers to see where there are beaches that have yet to be cleaned and surveyed which will lead to a more robust evidence base of what and how much is being washed up on Scotland’s shores.

“From the 5p carrier bag charge to the commitment for a Deposit Return System Scotland has seen how much power data on beach litter can have – this project will provide an entirely new dataset that will be crucial to highlight to Government and Industry what steps we need to take next to stop this plastic tide hitting Scotland’s shores.”

“When Peter Mackintosh from Sky Watch gave me a call, thanks to Catherine lining him and I up, it was a match made in heaven….We had a plan to map the coastal rubbish and pollution around our 500miles of coastline and he had a plane! The Sky Watch crew here in the north have been instrumental in developing this idea into one that could work right around Scotland. ‘The Boys’ – all retired – have given many, many hours working through the test sorties, the equipment and the techniques needed to get this amazing project on its feet. MFP is very proud to be part of that and we hope to bring on board all our fellow local coastal partnerships from around Scotland.”

The SCRAPbook project is part funded by the Scottish Government through Marine Scotland and captured the interest of the Cabinet Secretary for the Environment, Climate Change and Land Reform Roseanna Cunningham:

“I am delighted we are supporting this innovative project – SCRAPbook will make it easier to address the problem of litter from Scotland and many other countries gathering on our shoreline.

“Scotland has demonstrated leadership in tackling plastic pollution. We were the first administration in the UK to commit to introducing a deposit return scheme and have announced our intention to legislate against plastic cotton buds, one of the items most commonly found on our beaches.

“We are also establishing an expert panel to advise us on our work to reduce our reliance on single use items, meanwhile our National Litter and Marine Litter Strategies are helping reduce the amount of waste generated which can enter our seas.

“The partners in this innovative project have come together to help people look after their marine environment and I encourage everyone to get involved and support their work.”

2020 has been designated as Scotland’s Year of Coasts and Water and the SCRAPbook team hope the project will catalyse the largest strategic beach cleaning operation ever seen in Scotland next year, 2019, allowing the country to showcase a cleaner coastline in 2020.

More information can be found at: www.scrapbook.org.uk