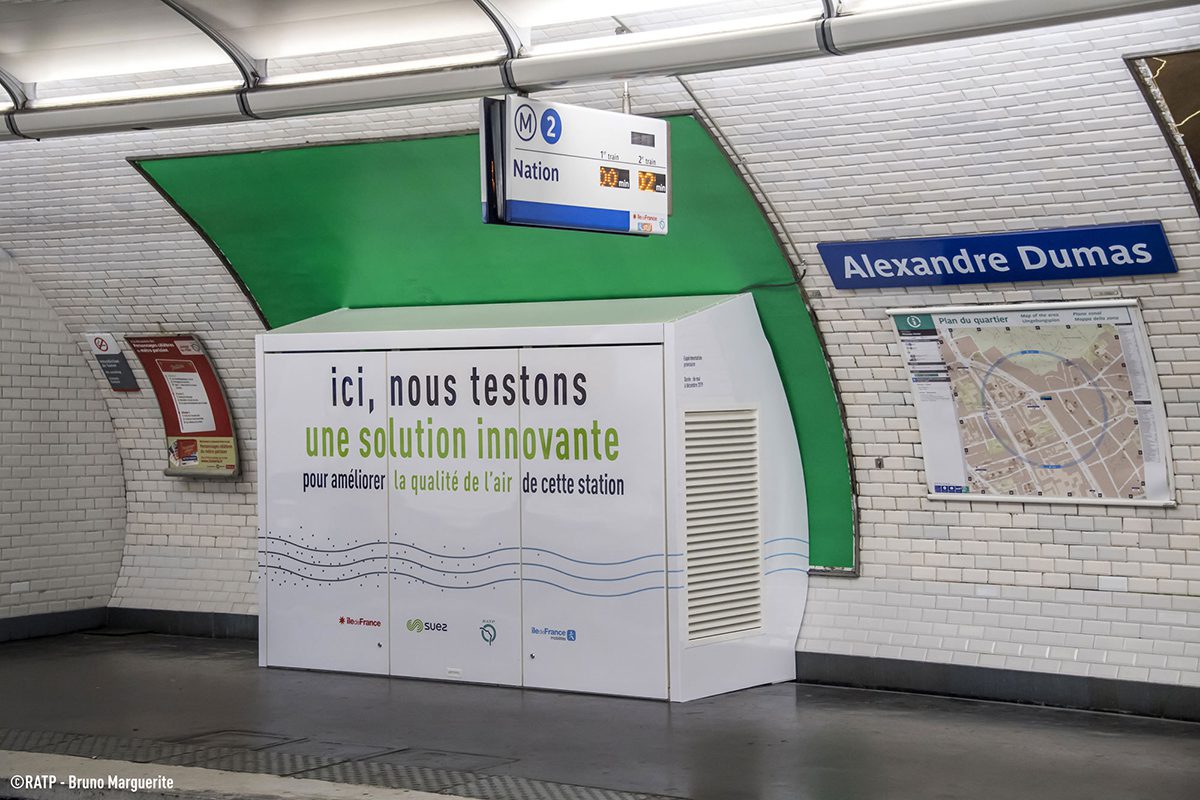 The system, called “IP’AIR”, is being tested by the utility firm Suez working in partnership with the transport company RATP, and was selected as part of the call for projects “Innovating to improve the air in our stations” (“Innovons pour l’air de nos stations”) launched by the lIe-de-France region in 2018.

Because air quality is said to be the region’s top priority for environment and health, and as part of its “Let’s change our air” (“Changeons d’air”) policy adopted in 2016, Ile-de-France region has introduced a seemingly unique support mechanism for projects that aim to improve air quality in public transport underground areas.

“Improving air quality in the public transport system is a key factor in our fight against pollution in lle-de-France,” said Valérie Pécresse, President of the Ile-de-France region. “I am proud that our ‘Changeons d’air’ policy will offer local residents innovative solutions to reduce pollution in our train and underground stations​.”

The policy aims to support projects that offer ways to improve air quality in Ile-de-France’s public transport in the long term. The goal is to provide innovative purifying solutions that capture airborne particles using devices placed on station platforms. A call for projects was launched in March 2018 – these were to be managed by the region in partnership with Ile-de-France Mobilités, RATP, SNCF and AirParif, and with a budget of €1 million. The “IP’AIR” solution offered by SUEZ Group was selected for testing in Alexandre Dumas underground station on line 2.

This policy aims to support projects that offer ways to improve air quality in Ile-de-France’s public transport in the long term. The goal is to provide innovative purifying solutions that capture airborne particles using devices placed on station platforms. A call for projects, managed by the region in partnership with IDFM, RATP, SNCF and AirParif, and with a budget of €1 million, was launched in March 2018. The “IP’AIR” solution offered by SUEZ Group was selected for testing in Alexandre Dumas underground station on line 2.

The “IP’AIR” solution offered by SUEZ will focus on treating fine particles (PM10 and PM2.5) emitted by brake systems in underground stations. The six-month test, which began on 3 June 2019, will assess the solution’s filtration capacity and range.

“RATP considers the air quality of its locations as a key importance. With our strong focus on technological improvements, we are delighted to test this innovative device offered by SUEZ and with the support of the Ile-de-France region,” said Catherine Guillouard, Chief Executive Officer of RATP Group.

This test is part of a set of actions taken by RATP to improve air quality in its underground stations, described as follows:

A pioneering solution for the Paris underground
The “IP’AIR” solution treats air using a positive ionization process. This technology is based on an innovative electrostatic filtration process: a small electric charge is injected into the fine particles which are then attracted, like a magnet, to collection plates. The technical solution is able to treat a large quantity of air (7,500 m3/h) using the same amount of electricity as a bread toaster.

“Faced with the environmental challenge of air quality, SUEZ supports local authorities and industries by offering innovative air treatment solutions designed for different environments (industrial, urban, underground, etc.),” said Marie-Ange Debon, Senior Executive Vice President in charge of France, Italy and Eastern and Central Europe at SUEZ Group. “The Group is proud to have been selected for this call for projects. This experiment will help to improve quality of life for the region’s inhabitants. At the end of this pilot, the Group will be ready to offer the device to public services and inhabitants of French and international metropolis, also concerned by air quality.”