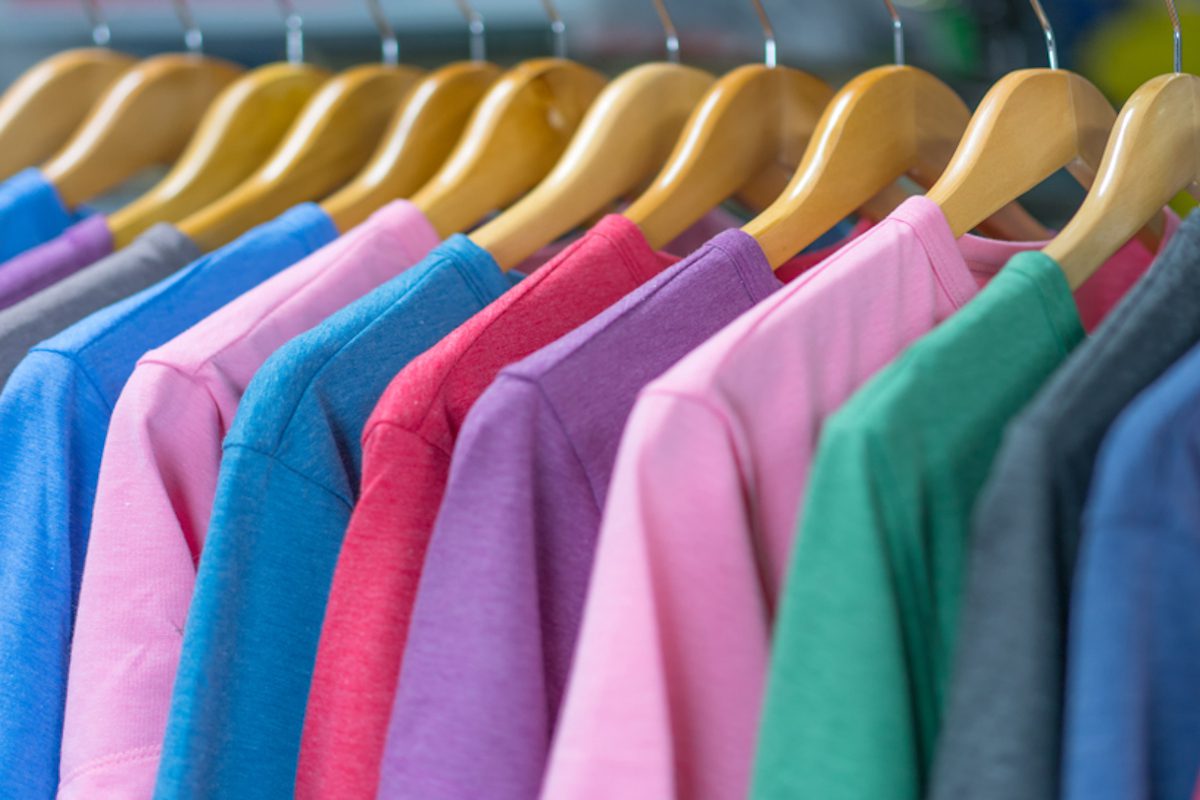 Dr. Akmez Nabeerasool is a Senior Project Manager at Arvia Technology, a provider of advanced tertiary water and wastewater treatment systems. Below he discusses the issue of water pollution in the fashion industry

The fashion industry is reliant on water. Without it, the majority of manufacturing processes wouldn’t be possible. To put it into perspective, one cotton t-shirt uses enough drinking water to sustain one human for three years; 2,700 litres.

Multiply that by 20 garments a year for 7.7 billion people and you begin to grasp the magnitude of the problem. As reference, it can take up to 200 tons of fresh water to produce a ton of dyed fabric.

Startlingly, the fashion industry is now the second largest generator of pollution on Earth after the oil industry, which is driven by the snowballing effect of ‘fast fashion’. Major brands who produce cheap, low-quality clothes designed to be worn a few times and disposed of are at the centre of the problem.

Online shopping and easy access to one-wear items has created a culture where clothes are worn a handful of times and thrown out. A study by McKinsey & Company uncovered that in 2014 the average person owned 60% more clothes than the average consumer in 2000, but only wore them for half as long.

In the constant search for ‘newness’, wardrobes are constantly updated and changed, with clothing becoming as disposable as the packaging it arrives in. Not only does this produce an inordinate amount of textile waste, it has also resulted in water usage for textile and fashion manufacturers rocketing.

We are increasing our personal use and depleting our useable supplies of water simultaneously, at such a rate that demand will outstrip supply by 2030**.

The problem is twofold. We are both using astronomical amounts of water during the manufacturing process, while also expelling huge amounts of contaminated wastewater back into the environment.

Awash with chemicals
Chemicals are one of the main components in clothes and they are used in most steps during the manufacturing process. During the fiber production, dyeing, bleaching, and wet processing of each of our garments, chemicals are used.

Bleaching and dyeing have huge environmental impacts and are two processes which the global fashion industry is reliant on. Dyeing and treatment of garments makes up roughly 17-20% of all industrial water pollution according to the World Bank.

While most dye is absorbed, around 20% stays in water and can be released into the environment. There is no single step within the current clothing production process which doesn’t involve chemicals in some way.

In the various processes that turn raw material into fabrics, over 8,000 synthetic chemicals are used. As an estimation, it takes 200 tons of water to produce 1 ton of dyed fabric. This involves sourcing fresh water and releasing water that is tainted, rendered toxic, undrinkable or otherwise polluted back into the eco-system.

A large majority of textile manufacturing occurs along waterways of the developing world. The detrimental effect of pollution on local and wider communities, which rely on waterways for their food, watering livestock and sustenance, is immeasurable.

Wastewater produced during the manufacturing process is often discharged directly into rivers and waterways, meaning it should comply with discharge regulation to avoid polluting the environment and causing irreparable damage. However, this is often not the case.

Unfortunately, these chemicals are often still present in wastewater, even in trace levels, when they are discharged into the environment, which has been proven to cause lasting damage.

The main culprits contributing to water pollution
Europe is leading the way with treating wastewater, although there is still a disparity between regulations. In particular, the Scandinavian nations have set a precedent, with many developing nations now beginning to follow suit.

Today, China is still the world’s largest clothes exporter, and the inevitable pollution as a result is becoming a major cause for concern. China’s State Environmental Protection Administration declared that nearly one third of the countries’ rivers are classified as “too polluted for any direct human contact”.

The Chinese government has taken drastic measures, with CEOs of businesses who are found to be polluting facing serious jail time. Despite this, many textile factories still dump untreated chemicals into rivers, and are responsible for some of the most polluted rivers in the world.

The dumping of toxic chemicals used mostly for dying fabrics has made large sections of major rivers like the Citarum river in Indonesia and Pearl river in China uninhabitable for fish and other animals.

The Citarum river in Indonesia, for example, has over 200 textile factories along its riverbank. It is the most polluted river in the world. Residents that live along the river rely on this water source, yet clothing manufacturers often dump chemicals without any treatment.

High rates of cancer and other diseases have been found in communities living next to highly polluted rivers, particularly near textile factory water outlets. The contaminants which are being pumped into waterway are creating increasingly complex mixtures which pose an undefined, and unquantified risk to the environment.

As the scale of the threat becomes clearer, so does the necessity for action.

The disparity of regulations around the world
Regulators are trying their utmost to maintain a healthy environment while holding off the impending water crisis, although progress is slow.

There is still no single unified wastewater discharge regulation around the world, meaning each nation is making progress at their own pace.

The response from regulators so far has been to increase the frequency of testing and analysis and to introduce stricter controls.

The harsh reality is that there is still a large number of contaminants which we know very little about. The first step has been to identify these various contaminants in waterways, and hopefully build a picture of what we are exposing ourselves to.

Policymakers are taking steps in the right direction with the introduction of regulations such as REACH which calls for the registration, evaluation, authorisation and restriction of chemicals.

As more knowledge becomes available, its sensible to expect that regulation and controls will tighten rather than relax.

Eliminating contaminants in water
However, the process of treating wastewater itself is not without its own issues.

In traditional wastewater treatment processes such as Advanced Oxidation Processes (AOPs) combined with hydrogen peroxide, Fenton’s reagent (a combination of chemicals), and reverse osmosis, large doses of chemicals including biocides are used to eradicate contaminants or prevent the processes from fouling and blocking.

This brings with it a substantial ongoing operating cost along with a toxic sludge- which similarly needs to be treated.

This sludge created through using chemicals, counter-intuitively, needs to be incinerated or sent to landfill, which is equally as damaging to the environment.

These chemical reliant methods can also fail to target trace level pollutants which are extremely difficult to remove.

This final stage of water treatment known as tertiary or quaternary has always been challenging, and as a result, it’s now become a necessity for industries to use a combination of processes for an effective treatment result.

The solution to wastewater treatment
Advanced technology has been developed to fill the gap in the market for environmentally friendly treatment systems which avoid the use of chemicals and target the final upper percentile which normally goes untreated.

One example is Arvia’s Nyex™ processes – this is a tertiary treatment process, meaning it is designed as a final ‘polishing’ step for the persistent hard to treat contaminants. The technology can help textile manufacturers meet the many strict discharge consent limits with respect to organics in the form of COD, colour and specific hazardous chemicals such as Nonylphenols.

Arvia’s solution has successfully treated effluent from cotton dye houses, various laundry wastewater’s and dye wastewater. The technology negates the need for chemicals, and targets specific micropollutants with a combination of adsorption and electrochemical oxidation.

Rather than dosing wastewater with chemicals, the water percolates through a carbon-based media which the organic pollutants ‘stick’ to. A low electrical current is applied to the bed of media to oxidise the organics and simultaneously regenerate the surface of the media to allow for further treatment.

Positive steps
Fortunately, the tide is beginning to turn as consumers and businesses alike become more aware of the looming threat of the fast fashion industry. Environmentally friendly wastewater treatment, a proactive approach from businesses and the education of consumers all have their part to play.

With mounting pressure from the public, groups such as the Zero Discharge of Hazardous Chemicals Group (ZDHC) comprising major fashion brands have been set up to help safeguard the environment. The suppliers and manufacturing sites of these fashion brands are now audited to ensure they meet tight pre-agreed discharge consent limits for their effluent across all their sites.

As one of the largest generators of pollution, the global fashion industry has its role in ensuring we both protect our diminishing supplies of water and keep our waterways safe from dangerous contaminants.

In a huge global beast like the fashion industry, where costs are constantly driven down by brutally fierce competition, the opportunities for taking an enlightened strategic direction can be limited. More stringent regulation and fines for businesses found polluting the environment with wastewater will undoubtedly bring change.

Often with any transformative industry change, the pressure has to come from consumers. But as the issue of unchecked pollution and wasteful water use reaches the public domain, businesses are now beginning to change.

On a consumer level, buying natural organic fibre products like flax, monocel (bamboo-based) and linen can significantly help reduce the amount of water used. So too does cutting wasteful, frequent laundry and looking for products which have been made with natural dyes.

Unfortunately, such cultural shifts toward more environmentally-friendly lifestyles can take decades to implement and present extreme challenges for the industries concerned.

Until the culture of fast fashion has been quelled, it is down to consumers and businesses alike to make small, yet transformative changes.

Businesses who use water in their manufacturing processes must take responsibility and utilise the latest technology before its too late. Rapid advances in water treatment technology mean organisations can now treat wastewater in an environmentally considerate way, while being able to reuse as much as possible in-process and vitally, ensuring all water discharge regulations are met.