An interactive multimedia installation set up in London’s Covent Garden is intended to raise awareness and hopefully “spark a national conversation about air pollution”.

The ‘Pollution Pavilion’, situated in Covent Garden’s Piazza, is the work of environmental charity Hubbub and Grosvenor Britain & Ireland, which are urging people to help make air quality a political priority wherever they live.

Research released on 14 January by Hubbub finds 80% of Britons are worried that the UK limits for air pollution don’t match WHO guidelines. The survey also found that 83% of people are worried about how air pollution could affect them or their families – this rises to 89% for parents with primary school-aged children and 92% for those with under-fives.

Across the UK, almost 2,000 locations across England, Wales and Northern Ireland have levels of air pollution that exceed the WHO’s guidelines. On 18 March 2019 London had already breached European and UK PM10 limit for the entire year and nearly every area of the capital breaches WHO guidelines for PM2.5 pollution.

Trewin Restorick, CEO and Co-founder of Hubbub said: “As air pollution is invisible it’s really easy to ignore this issue, but there is a very real threat to our health. There’s lots we can all do to improve the Air We Share and have a positive impact, but what we really need is legislation and initiatives that deliver clean air for everyone. We are today urging everyone to write to their local MP to get this important issue higher up on the Government’s agenda.”

Tor Burrows, Director of Sustainability and Innovation, Grosvenor Britain & Ireland said: “Poor air quality in our cities is a reality for too many people. As a business we have committed to achieving net zero carbon by 2030 and are playing our part by reducing traffic, increasing greening and helping all our tenants to operate more sustainably. But this is not enough, we need our elected officials to push harder and faster towards a net zero carbon economy. Please lend your voice to demand the air quality we all deserve by contacting your MP.”

Professor Frank Kelly, Head, Department of Analytical, Environmental and Forensic Sciences, King’s College London said “Air pollution is a grave risk to human health. The more we have investigated the issue the more problems have been uncovered from effects on the unborn child to a contribution to neurodegenerative disease in adults. Installations like this play an important role in raising interest and understanding about the air pollution challenge and I applaud Hubbub and Grosvenor in working with King’s College London to bring this issue to the public’s attention.” 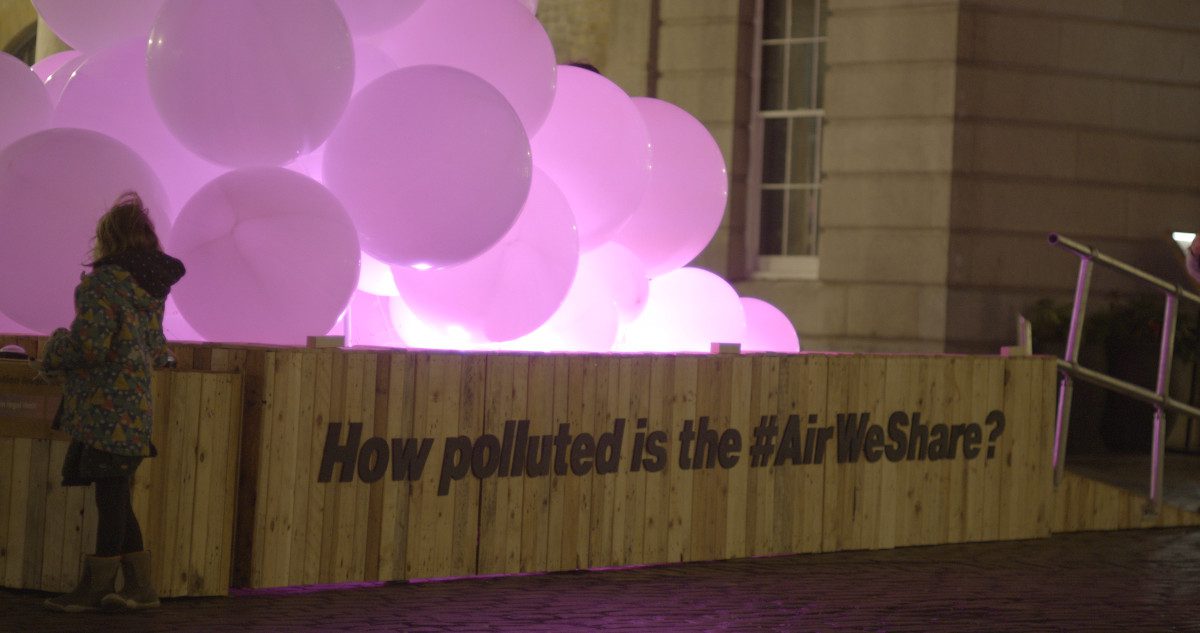 Sadiq Khan, Mayor of London said: “It’s great to see campaigners, businesses and academics collaborating on creative ways to help the public understand the dangers of air pollution and encourage them to take action. Air pollution is an invisible killer and I’m taking some of the boldest action of any city in the world to ensure Londoners can breathe clean air. This includes introducing the world’s first Ultra Low Emission Zone, which has helped slash roadside nitrogen dioxide pollution by around a third in the central London zone. We need Government to follow London’s lead and MPs to use their voice in Parliament to help clean our filthy air across the country. A key part of this is toughening up targets in the upcoming Environment Bill to meet World Health Organization air quality guidelines by 2030.”

#AirWeShare campaign urges people to take the following actions to lower their exposure to air pollution and to help reduce pollution:
• Switch car journeys for ones where you can walk, cycle or take public transport instead
• Re-route your journey. Choosing quieter routes rather than main roads has been found to reduce your exposure to air pollution by up to 50%
• Do you order online? You can reduce your online footprint by opting for click-and-collect or collect in store (or by choosing not to buy it at all!)
• Use your voice and your power to make positive change. MP’s act on our behalf. So, share your views with them and invite them to help to improve your local air

The #AirWeShare campaign launched in May 2019 and was created by Hubbub and supported by leading companies including Investec plc, Bunzl, First Mile, Grosvenor Britain & Ireland, Kingfisher and Innogy EMobility UK. The campaign provides practical advice about how people can protect themselves and their families, what they can do to reduce their own emissions, and how they can add their voice to the wider call for cleaner air. The #AirWeShare is also building a coalition of leading companies who want to test new ways of reducing air pollution; creating greener, safer and healthier cities that are better for employees and communities.

The Pollution Pavilion will remain in Covent Garden’s Piazza until 26 January 2020 and will move to Grosvenor Square in the Spring.