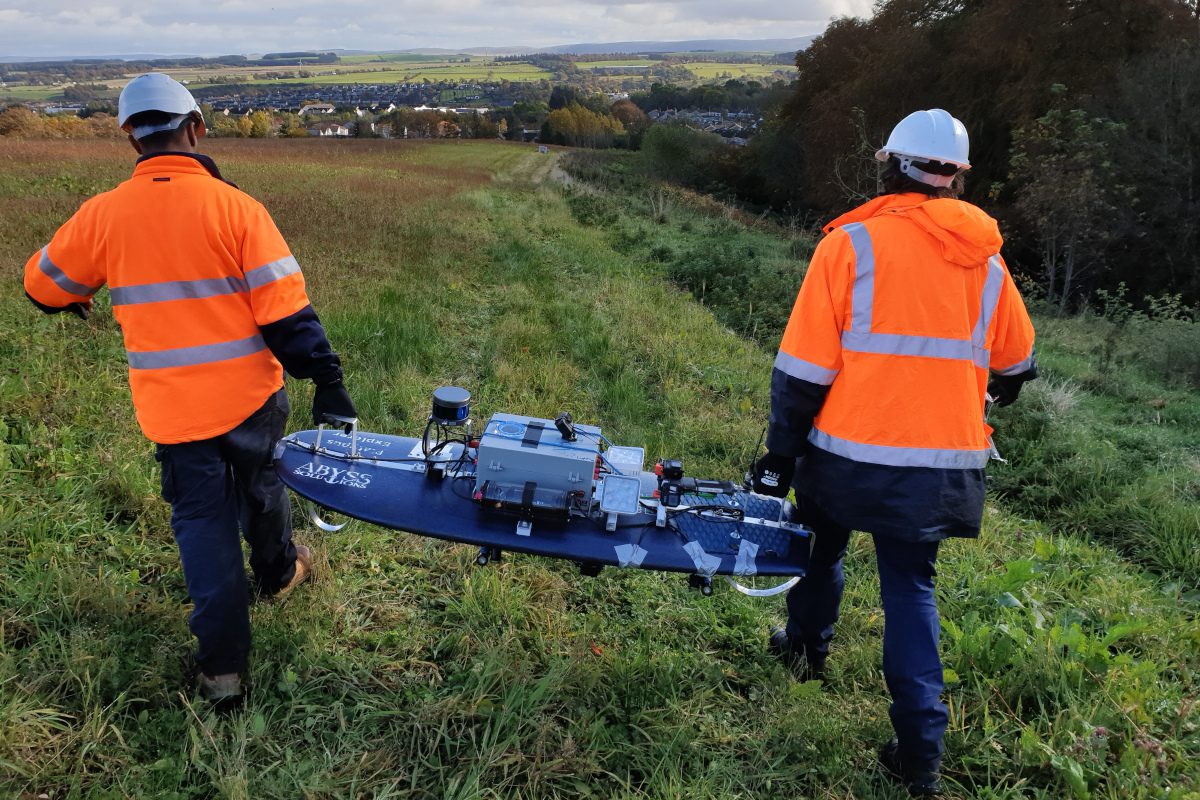 A simple surfboard has been turned into a state-of-the-art automated inspection device to gather information on the condition of infrastructure vital to the supply of Edinburgh’s drinking water, according to Scottish Water.

The utility says it worked with partners to develop the unique device to make it significantly safer, quicker, easier, and cheaper to detect and analyse cracks and other faults on hard-to-reach assets.

It recently successfully trialled the device – which has been called the Platypus due to the shape of it – to inspect of a section of the Talla Aqueduct which provides most of Edinburgh’s drinking water.

Previously, says the firm, inspections of this vital infrastructure were much more difficult and involved a team of up to 200 people and hundreds of hours. The aqueduct, which was built in Victorian times and is buried six metres below ground in places, needed to be fully drained in sections for inspection whilst ensuring no loss of water supply to customers.

The surfboard technology will now be used by Scottish Water to carry out an inspection of the entire 45-km length of the aqueduct. This time round far fewer staff will be needed and the process will be done much more quickly and at less cost and no water will have to be drained at the site.

The Platypus is seemingly the brainchild of robotics experts in Australia, Abyss Solutions. The firm had previously developed remotely operated vehicles (ROVs) which gathered high resolution underwater imagery from reservoirs. They adapted this to be able to gather high resolution imagery from above and below the water inside Talla Aqueduct so it could be kept fully operational.

Working with Scottish Water they created the Platypus, which operates as an autonomous surface vehicle (ASV). It was developed using a standard surfboard as a platform to support specialist recording equipment. High definition cameras and lighting were fitted along with sensors which steer it along a pre-programmed alignment and redirect it around obstacles.

The Platypus uses sonar, gathering data below water level and a remote sensing method that uses light in the form of a pulsed laser to measure ranges above water level. The data generates three-dimensional models of the internal surface which is recorded on the device. The footage is then passed through software which cleans up the images and is then able to identify and categorise defects within the asset. Once detected, engineers can carry out more detailed inspections and necessary repairs in these areas.

Darragh Hoban, project manager for Scottish Water, said: “Talla Aqueduct is a vital supply line for the Capital’s drinking water. It is an impressive feat of engineering and has stood the test of time, having supplied water to Edinburgh’s residents for well over a century. It was built robustly and is still in good condition overall.

“Like all water companies we need to maintain an ongoing understanding of the condition of our assets. To date inspections have been carried out every ten years and required water within the aqueduct to be drawn down so teams of inspection engineers and rescue personnel could enter the structure, with additional teams needed on the surface to coordinate activities and support safe access.”

“A number of factors led to us looking at new ways of inspecting the Talla Aqueduct. It is almost entirely below ground and access is mostly through access shafts often in remote locations which increase health and safety risks associated with personnel entry to the aqueduct. By removing the need for personnel entry to the aqueduct, the health and safety risks are substantially reduced and there is no need to interrupt water supply to the water treatment works. ”

The Platypus was recently trialled along a 1.5km long section of the Talla Aqueduct. It was the first time the asset was inspected without the need to physically send operatives into the aqueduct and without having to interrupt the flow of water. It recorded the dimensions and shape of individual features including valves, chambers, silt levels and surface defects. The data is then stored and this enables the interior condition of Talla to be tracked and predictions of any defects made – something that has not been easy to do using past inspection techniques. Frequent inspections of the same defects allows changes to be identified and monitored and, when and where needed, repairs or work to prevent defects carried out.

Mr Hoban said: “The trial was a huge success with the Platypus providing a safer and less disruptive method of inspection, we are now planning to inspect the remaining part the of aqueduct using the Platypus. Results to date indicate the Platypus ASV approach may also offer solutions for inspection of other similar Scottish Water assets.

David Brady, Head of Global Water at Abyss Solutions, and his team came up with the idea for the Platypus. They decided to use a surfboard due to its ability to float and manoeuvre round corners inside the Aqueduct – and told how they fitted it with the same technology used for the navigation of driverless cars.

He said: “Often difficult-to-get-to assets are underwater and we specialise in using remote operated submersibles fitted with specialised cameras and lighting. The Talla Aqueduct followed on from a number of similar aqueducts in Australia, one of which was home to a colony of endangered microbats.

“On each project we design and build survey vessels to suit the specific conditions. For Talla, precise positioning of any defects identified was a must as well as the accurate mapping of the tunnel’s route between access points. For this reason, the same technology used for the navigation of driverless cars was incorporated into the suite of sensors – and this time a surfboard.

“We relished the opportunity to apply the latest technologies, thinking a little bit outside the box for this specific brief, to assist with the ongoing operation of this engineering marvel.”

Aqueducts carry water from a source to a distribution point far away and often include pipes, ditches, canals, tunnels and valves. Talla Aqueduct started operating in 1905 and stretches from Talla and Fruid Reservoirs in the Borders taking raw water to Glencorse Water Treatment Work just outside Edinburgh. For most of its length the aqueduct runs as a tunnel, split by several bridges and siphons. It is capable of taking up to 127 megalitres of water in a day – enough to fill more than 50 Olympic swimming pools.

It had a £2.6m upgrade in 2014 when 350 metres of tunnels were refurbished and new valves and flooring put in its chambers. The work was carried out after Scottish Water engineers were sent into the tunnels to visually inspect the tunnel and identified areas which needed to be refurbished.