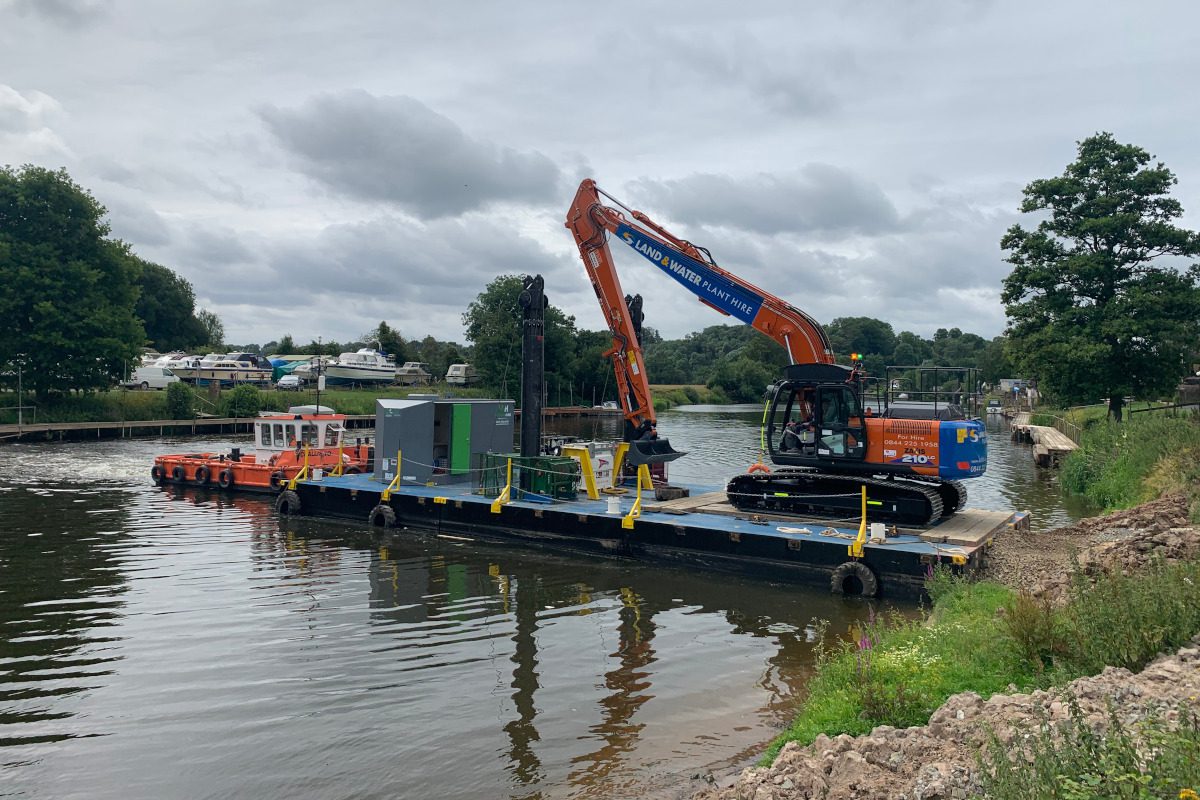 In early July, environmental engineering company Land & Water announced it was set to resume the construction of one of four fish passes along the River Severn in Worcestershire on behalf of its client, Kier.

As part of the project, known as ‘Unlocking the Severn’, Land & Water said it aimed to construct a large deep vertical slot for a fish pass at Holt Weir. This is essential for the rare migratory fish, the ‘shad’ to travel to their natural spawning grounds. The fish pass will also benefit salmon, eels and lamprey. The project is seemingly one of the largest river restorations of its kind ever to be attempted in Europe.

Land & Water’s works on site will include establishing site access and compounds upstream of the weir, the construction of a small slipway and offloading point and the installation of a large temporary dam structure within the river to prevent water ingress into the works area. The large mass dam is being installed from Land & Water’s floating pontoon.

Land & Water said it would also excavate the bank, using its specialist long reach excavators and tracked dumpers. Meanwhile, they also planned to oversee permanent solutions in the form of soil nailing and the installation of large-scale legato blocks, using a 100-tonne crane and 16-piece ravestein pontoon to achieve this.

Finally, the firm said it would manage engineering landscaping as part of this project, including erosion protection and amenity improvement of the area. The firm alluded to aspects of this woek such as use of special stability calculations to facilitate getting their equipment to site and to overcome the challenges of this difficult working environment.

Funded by the National Lottery Heritage Fund and the European Union LIFE programme, ‘Unlocking the Severn’ also aimed to deliver ambitious heritage, education and science programmes, said the firm, with the aim of reconnecting eight million people with the river.

Lucy Lee, Contract Manager at Land & Water, said: “We are very much looking forward to getting started on this project again. ‘Unlocking the Severn’ not only benefits the ecological system of the River, it inspires the community to learn about their local environment.

Despite being previously delayed due to the prolonged River Severn Flooding over the winter months, we now have a great chance to take advantage of the drier summer weather and lower river levels, making work easier and safer for our team.”

As part of its commitment to the wellbeing of its staff, Land & Water has prioritised the development of safe working practices, in accordance with Government guidelines, to ensure that work can be carried out without posing a risk to its employees or the public.

Programme Director Jason Leach said: “It is important to us that we have the social distancing rules in place to protect our staff and the general public, whilst ensuring as little disruption as possible. We have worked with leading construction company Kier so that we can adapt to the current challenging conditions, delivering the project in a safe and timely manner.”