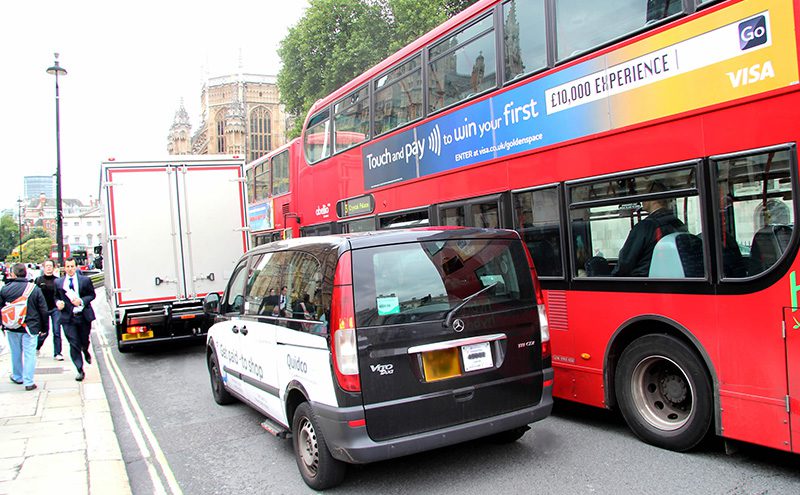 A new analysis released on 15 September by Environmental Defense Fund Europe (EDF Europe), based on data from the Waze for Cities Programme, appears to show that traffic congestion is currently increasing in London and it is now worse than 2019 levels outside the city centre. The analysis examines data from May 2020 onwards.

In the week preceding the study’s announcement, average congestion on roads outside the central London Congestion Charging zone was 18% higher than last year. The most congested day was Monday 7th September, when congestion was 153% of 2019 levels. This compares to roads within the zone, which were on average last week just 55% of 2019 levels, up from the lowest point of 6% recorded week commencing 4th May 2020.

Congestion in central London is lower than usual, helped by changes to the Congestion Charge scheme and fewer visitors to the area. However, city centre traffic congestion will need to be closely monitored given there has been a steady increase over the past few weeks.

New data from the Department of Transport also shows a near 50% increase in van mileage on urban roads in the past decade.

Traffic congestion disrupts essential journeys and creates unpleasant places to walk and cycle, making it difficult to discourage car use as the city emerges from lockdown.

This is concerning for London’s poor air quality given recent EDF Europe analysis that uncovered nitrogen oxides (NOx) pollution from diesel cars was already higher at study sites outside the centre. In addition to public health impacts, a car-led recovery also has significant risks to road safety, economic recovery and climate change.

Oliver Lord, Head of Policy and Campaigns at Environmental Defense Fund Europe said: “Traffic congestion is precisely what we should prevent as our polluted city emerges from lockdown. We need to help people get around without private cars because congestion delays buses, disrupts essential trips and makes it horrible to walk and cycle. This analysis is a rallying call for action, including safer streets for cycling instead of driving, more public transport connectivity and a concerted effort from business to curb the record number of vans on our streets.”

Stephen Edwards, Director of Policy & Communications at Living Streets, the charity for everyday walking said: “This concerning data should serve as a warning that the opportunity to embed the health and environmental benefits of fewer vehicles is not lost. Better streets for walking and cycling are better for us all. We must move ahead with schemes to promote these behaviours.”