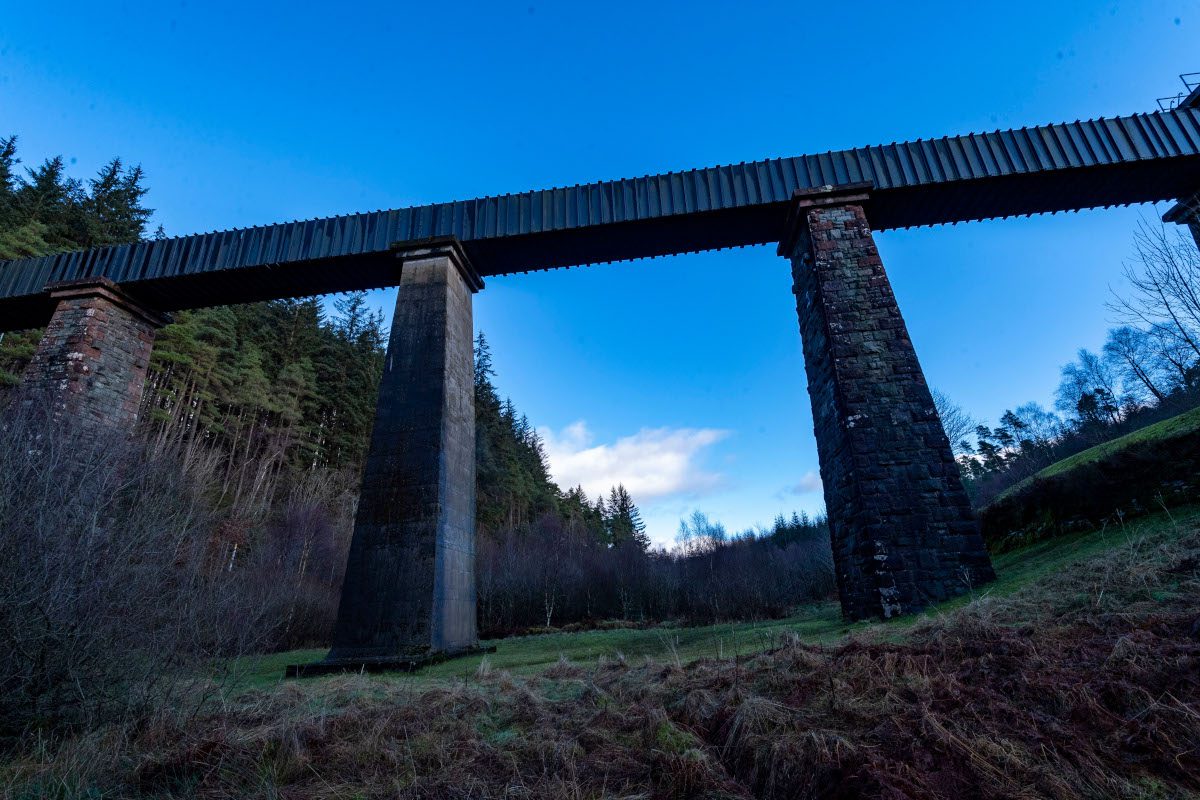 A major upgrade to the Katrine Aqueduct, which was built in Victorian times and serves more than 1.3 million people in parts of Greater Glasgow and the Scottish central belt, has been completed, according to Scottish Water.

The £20 million project set out to improve and refurbish parts of the two aqueducts, the first 34 miles long and the second 23.5 miles long, which take water from Loch Katrine to two of Scotland’s biggest water treatment works.

The investment was the latest phase of the biggest upgrade to the megastructure since the first aqueduct was built in 1859, when it was hailed as one of the world’s greatest engineering feats of its day.

A total of 17 miles of tunnel sections had concrete and masonry repairs and 10 bridge sections had masonry and metalwork repairs carried out by a team of about 35 workers over the past two years, with a three-month break due to the Covid pandemic.

The aqueduct takes raw water by gravity, with no need for pumping, along its two routes from the south shore of Loch Katrine to the Milngavie and Balmore Water Treatment Works (WTW), just north of Glasgow, which treat about 550m litres of water every day, enough to fill more than 275 Olympic swimming pools or more than six million baths.

The original aqueduct includes tunnels through mountainous terrain in the shadow of Ben Lomond and bridges over the valleys of the Duchray, Endrick and Blane watercourses. It was built to provide Glasgow with its first proper water supply.

A second aqueduct was constructed to accommodate the rapid expansion of Glasgow in the late 19th century. They are as much as six miles apart on some stretches, just five metres apart on others.

Milngavie WTW serves more than 700,000 people across much of the Glasgow area and Balmore WTW serves about 600,000 customers in areas from Bishopbriggs, Lennoxtown and Torrance in the west to parts of north east Glasgow and Cumbernauld, north Motherwell and Linlithgow, Bo’ness and parts of Grangemouth in the east.

One of the most challenging parts of the project, which was carried out for Scottish Water by contractors George Leslie, was work to stabilise exposed rock sections, during which the project team used an unusual technique that involved drilling into the rock, inserting steel anchor bolts up to two metres long, attaching steel mesh reinforcements and then spraying concrete until structural integrity was established.

Complex drilling rigs had to be set up within the tunnels to install the stabilising rock anchors. 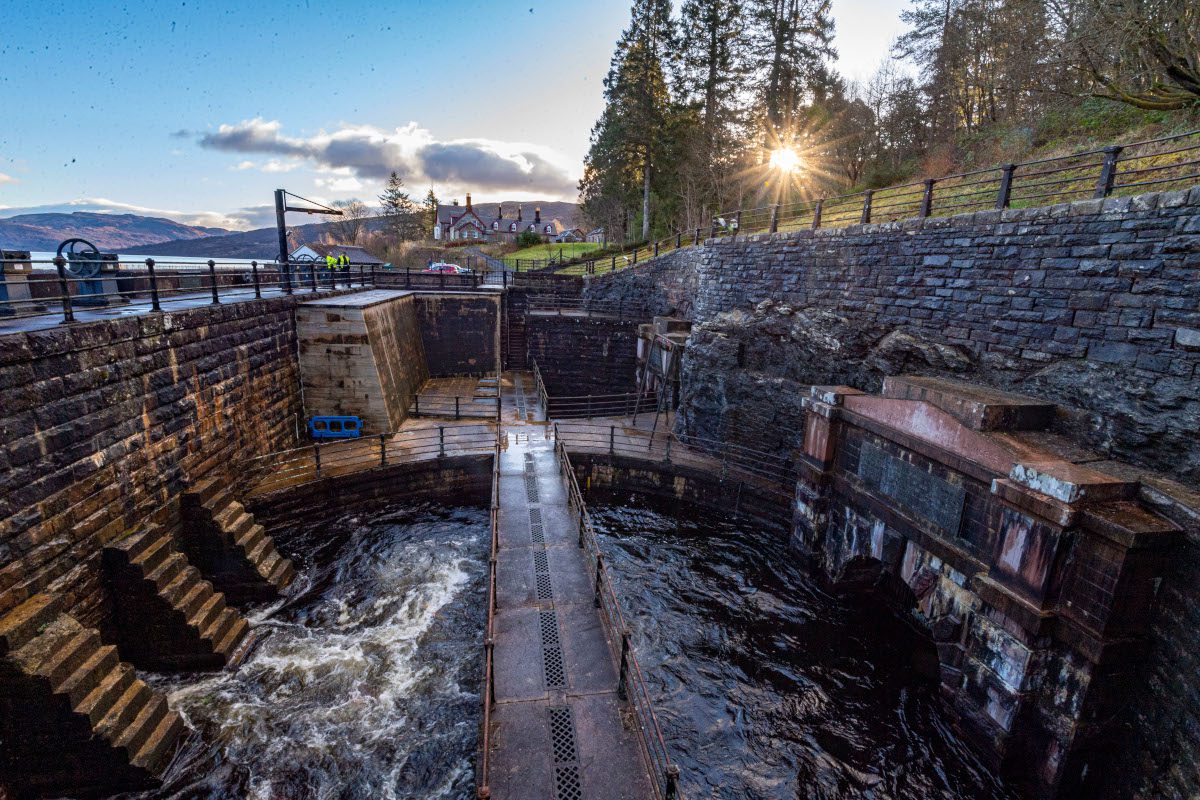 Given that some of this work was more than half a mile along the aqueduct from entry chambers, electric buggies were used to move equipment, materials and workers.

The entire length of the ‘new’ and ‘old’ aqueducts were closed at different times during the project. But, through the use of cross-connections in our system and by pumping water from elsewhere on our network, we were able to maintain normal water supplies to customers.

Strict adherence to constraints and restrictions were necessary to ensure that the character of the historic structure was preserved, said the utility.

Reconstructed areas of masonry on every part of the structure had to be matched with the existing stonework in terms of appearance and painting and protective coating systems were chosen carefully to blend with the surrounding structure.

“We liaised with Historic Environment Scotland about our work, including refurbishment of the Duchray Old Truss Bridge and the Kinlochard and Castleburn bridges, which are listed structures,” said a press release from the utility. “As well as upgrade work to both aqueducts, the project included a survey to improve our understanding and feed into a 25-year management plan for the aqueducts.”

“This is the first time in living memory where we have carried out a full internal survey of the new aqueduct.”

David Wilkinson, Scottish Water’s senior project manager, said: “The Katrine aqueducts, which were part of a scheme opened by Queen Victoria in 1859 to provide Glasgow with its first proper water supply and help tackle disease, were a remarkable feat of engineering of their day and remain an outstanding example of sustainable civil engineering public works construction.

“They have stood the test of time and are still performing very well but, despite some improvement work over the years, they required substantial improvement and refurbishment to ensure they continue to operate efficiently.

“All of the team feel privileged to have been involved in such a unique project. We all felt a degree of responsibility for making sure that the full scope of remedial work was delivered, and that it was done to the high standards set by the Victorian engineers.”

Great-grandaughter of Victorian labourer comments on the upgrade
Adding a rich layer of historical context to the story, Scottish Water said it had been able to contact the Great Grandaughter of a man who helped build the Katrine Aqueduct.

After the discovery of amazing old photographs of the construction of the aqueduct was publicised on BBC Scotland’s Landward programme and Channel 5’s Secret Scotland series last autumn, Aileen Kerr, from Troon, contacted the utility and revealed that her great grandfather, James Savage, was one of the 3000 workers who built it.

“We’ve been unable to establish if he is in any of the old photographs but, with Aileen’s help, we know that her great grandfather was an Irish farm servant working in Dumfriesshire who moved to Milngavie between 1881 and 1890, possibly due to the prospect of more prosperous employment, and worked on the aqueduct until 1901,” said Scottish Water.

Aileen said: “My great grandfather married my Great Grandmother in Milngavie in 1890. On the marriage registration he is shown as a ‘Waterworks Labourer’.

“The records show that the family had moved to Sunderland by the1901 census, where he was an Engine Fitter and Foreman.

“So it would seem that my great grandfather did manage to move up the work ladder during his time in Milngavie.”

She added: “It was amazing how the aqueduct was built without the sort of equipment and safety precautions we would have nowadays.

“The fact that it is still operational is a testament to everyone involved in its construction, including my great grandfather, and it’s good to hear of the completion of this recent improvement work by Scottish Water to enable the aqueduct to continue to provide so many people with water.”

In the construction of the second aqueduct that James Savage worked on, the engineers were able to take a more direct line than with the first aqueduct because they had improved boring and blasting equipment.

When the second aqueduct was constructed, the pneumatic drill and gelignite were available and progress was much more rapid than during the first aqueduct, increasing from 35 to 44 yards per month.

The possession of more efficient plant enabled the engineers, by tunnelling, to take a straighter line through the hills in the construction of the second aqueduct. This meant only eight bridges were required on the second aqueduct compared with 22 on the first.

The entire Katrine Aqueduct scheme cost £3.2m to build, which would be about £320m in today’s prices.