When it comes to decarbonising the UK economy, many suggest the use of hydrogen for hard-to-electrify transport applications as indispensable.

A new study and Well-to-Tank (WTT) model by low carbon technology consultancy Element Energy, commissioned by Zemo Partnership (formerly LowCVP), appears to identify a range of optimal pathways for the production, distribution and dispensing of low carbon hydrogen to transport end-users. The authors say that it shows, in a high level of detail, the energy requirements and greenhouse gas emissions resulting from each potential pathway, as well as the infrastructure requirements related to each choice.

The research looks at a combination of six production configurations, three distribution pathways, and two dispensing options – a total of 32 potential pathway combinations.

The work identifies the greenhouse gas emissions associated with each hydrogen supply chain pathway, based on technologies available today, as well as those expected to be commercialised in the medium-term such as offshore electrolysis, gas reformation with carbon capture and storage (CCS) and waste gasification with CCS.

It seems to show that fundamental choices exist in terms of the production of ‘green’ hydrogen using electrolysis powered by renewable electricity or ‘blue’ hydrogen, primarily produced by reforming fossil natural gas combined with CCS. It also looked at the implications of using biomethane in place of fossil gas and hydrogen derived entirely from biogenic waste. 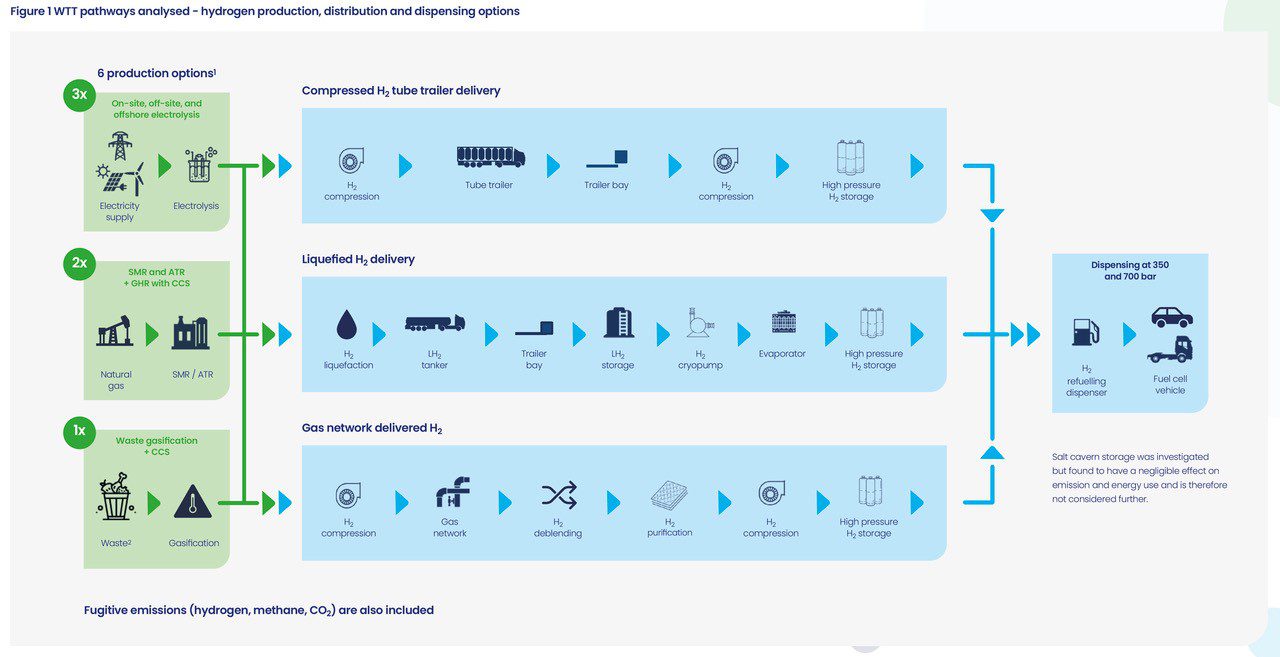 The study also considers the energy use together with emissions arising along the full production, distribution and dispensing pathway, including unavoidable – or fugitive – emissions likely to arise during the process. It shows that there is a wide variation in the emissions associated with each of the alternative pathways, depending on the carbon footprint of the energy and feedstocks used.

The work suggests that renewables-based electrolysis is expected to represent one of the lowest emissions pathways in the medium-term. Natural gas reformation using emerging autothermal (ATR) technology with CCS could also significantly reduce emissions compared to current industrial steam methane reforming (SMR) process for so called ‘grey’ hydrogen. There are even potential pathways to generate carbon-negative hydrogen when biomethane is used, or through the gasification of waste, allied with CCS. (However, there are potential limitations on the future availability and supply of biomethane.)

Whilst the study showed GHG emissions can be almost eliminated, improvements in the efficiency of the process of electrolysis are expected to contribute to a modest reduction in the energy intensity of this pathway in the medium-term. There are opportunities to co-locate hydrogen production with renewable energy, using surplus or currently curtailed energy at times of high production/low demand.

The authors say the study provides a detailed model allowing new pathways to be assessed and gives an overview of the quality of the data used in the analysis, identifying areas where further work and monitoring is needed.

“Our work shows that hydrogen could be a key option but policy will need to incorporate full consideration of the energy consumed by low carbon fuel supply chains if we are to achieve future climate goals.”

Celine Cluzel, Project Director, Element Energy said: “This study is very timely in the context of the recent Transport Decarbonisation Plan. It does, in an authoritative way, show that there are many clean hydrogen pathways. Policy makers must now put in place the frameworks to make sure the cleanest pathways are delivered, to support the UK transition to a net zero economy.”

David Gill, Head of Customer Energy Solutions at Northern Gas Networks said: “This comprehensive report demonstrates how the existing gas network can play a vital role in delivering hydrogen to decarbonise heavy transport and shows there are a number of viable pathways for hydrogen production to achieve the goal of zero carbon transport.”

The study Executive Summary is available here and the full report here.