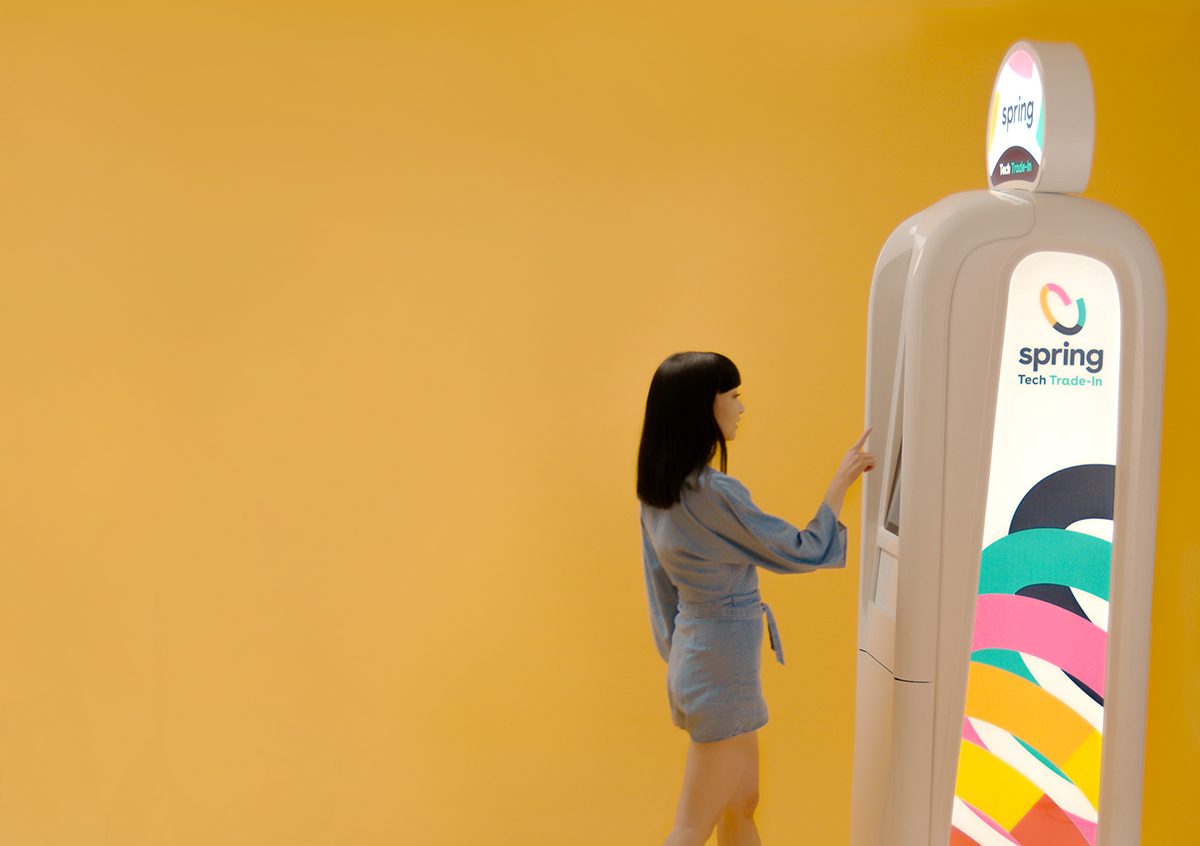 Supermarket chain Co-op has partnered with new “tech-recirculation service”, Spring, to try to make it easy for consumers to get their unused electronic devices back into circulation.

The new service is initially launching trials in more than 20 Co-op stores[1] with kiosk-style ‘pods’ intended to make it quick and easy for shoppers to sell their old devices such as phones, tablets, e-readers and smartwatches, which then get repaired, refurbished, reused, or recycled. The service is initially launching in Co-op stores in London with further locations in Manchester, Leeds, Brighton, and Birmingham to follow.

Spring has ambitious plans to work with other retailers and have more than 250 pods across the country in the next 12 months, which will get around 100,000 devices back into circulation, saving more than four thousand tonnes of CO2. Where devices cannot be re-used, Spring will ensure all components are recycled – ensuring nothing will go to landfill or incineration.

All electrical devices, including smartphones, that are thrown-away constitutes e-waste – with much being incinerated, landfilled, or shipped illegally overseas, often having a catastrophic impact on the environment.

What’s more, the precious materials – including gold, copper, aluminium, and steel – that are discarded within these devices every year are estimated to be worth more than £370 million in the UK alone[2] and are used in several technologies vital to the environment and our wellbeing, including wind turbines, solar panels, artificial joints, and pacemakers.

Latest figures show the UK produced a total of 1.6 million tonnes of e-waste in 2019, which is the equivalent of 23.9kg per person.

When electronic devices are binned, many precious materials are lost, especially in newer devices such as smartphones. Ideally, the devices are repaired and reused – putting them back into circulation for other people to use rather than needing to create new ones. This is what Spring aims to achieve by raising awareness of the e-waste issue and making it simpler for increasingly environmentally conscious customers to recirculate their unused devices, with around nine in 10 consumers (88%) wanting help from brands to live more sustainable lives.[3]

Spring’s pods accept almost 12,000 devices and customers will receive payment to their Spring account in 2-5 days, which can be transferred to a bank account or charity. An account can be set up quickly and easily at Spring.co.uk.

Tom Williams, Co-Founder, at Spring said: “Creating a circular economy is key to living more sustainably, that’s why we’re aiming to get almost 100,000 devices back into the world over the next year. Spring makes it easy for both retailers and consumers to recirculate old tech, which not only puts money in their pockets but also has a major impact on the environment. Starting with Co-op, hundreds of Spring pods will be popping up at retailers around the country in the coming months – find your local one at Spring.co.uk.”

Mark Matthews, Co-op’s Director of Innovation and Format, said: “Co-op is committed to operating at the heart of local life and creating value in our communities – we are working to develop new ways to provide added services and choice, conveniently. Our partnership with Spring will make it easy for consumers to recycle or reuse their electronic devices locally and prevent unnecessary waste. Making it easier for consumers to make small changes to their lives, can add up to making a big difference for our environment.”

The electronic waste problem in numbers[4]