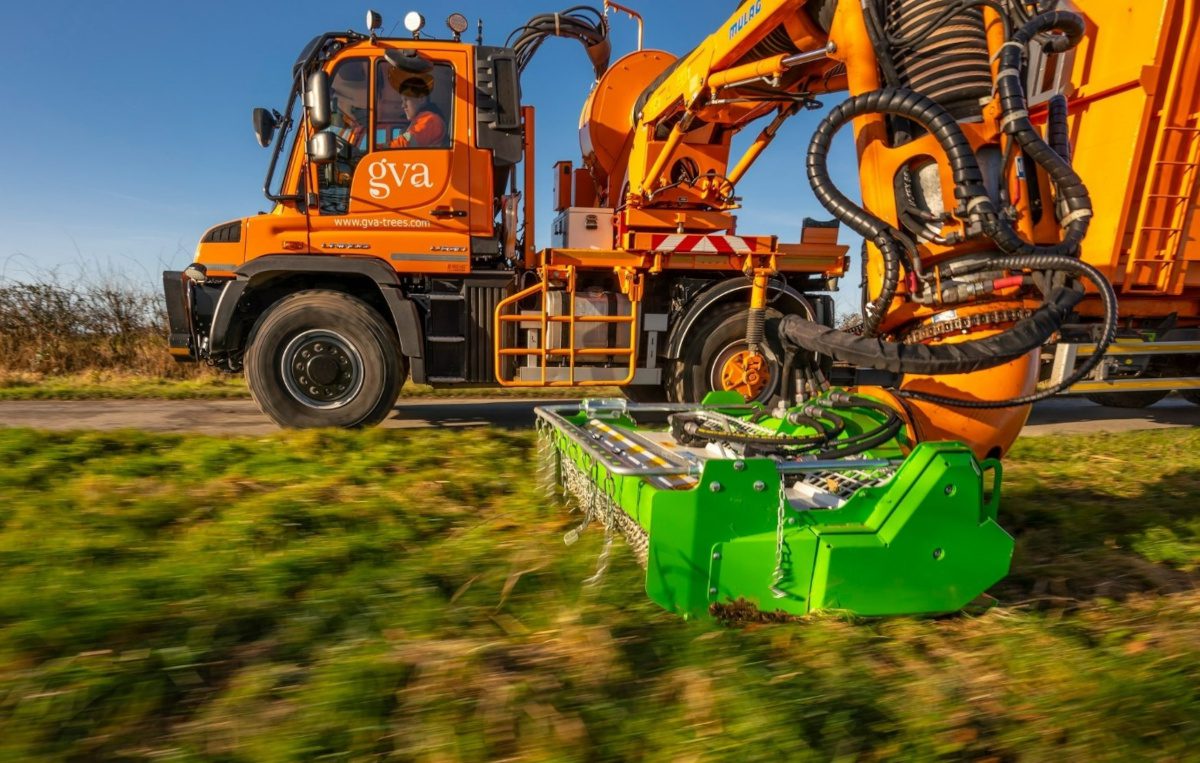 Specialist contractor GVA has become the first UK customer for a new, environmentally-friendly mowing head designed to protect insects and other creatures.

The ECO 1200 plus head was developed by Mulag and delivered by South Cave Tractors, the German manufacturer’s agent in the UK. It has now been fitted to the PTO-operated Mulag SB600 suction mower that Halifax-based GVA has been using since 2019.

Both the suction mower and ECO1200 mower head were supplied by South Cave Tractors, of Brough, East Yorkshire, as was the Mercedes-Benz Unimog on which it is mounted. The 4×4 vehicle pulls a Harsh drawbar trailer with grass collection box.

Green areas from which cut grass has been removed become increasingly nutrient-poor, which in the longer term leads to an uplift in biodiversity among plants and insects.
South Cave Tractors Managing Director Tony Levitt explains: “The ‘cut and collect’ set-up being used by GVA was already supporting sustainability by sucking up the cut grass, then scarifying the ground ready for planting with wildflower seeds.

GVA will be deploying the mowing and collection system on motorway and major A-roads throughout northern England this spring, when it becomes a direct supplier of ecology and landscaping works services to National Highways. Biodiversity is a top priority for the Government-owned company, which changed its name from Highways England last year, and would-be suppliers are encouraged to demonstrate their ability to deliver environmental gains.

The ECO 1200 plus head features a disc mower, ahead of which a mechanical scourer is fitted. The scourer ‘chases up’ insects sitting in the grass before the cut material is sucked up from above. The mower has a 1.2m cutting width and also employs ‘sensor rollers’ that offer reduced ground contact and thereby provide more protection than a conventional pressing roller.

The cutting surface of the new disc blades is approximately 50 times smaller than that of a flail mower, which is more commonly used to undertake such work. As ecology experts have found that cutting heights above 10cm greatly increase the chances of survival for creatures living in and on the grass, the ECO 1200 plus head is designed to cut no lower than this.

Tests conducted by the University of Tübingen’s Institute of Evolution and Ecology confirmed that in comparison with a standard mower, operation of the Mulag ECO 1200 plus results in a reduction of between 20% and 80% in losses of spiders and most insect groups. Importantly, these tests focused solely on the mower and not also the scourer, so the potential benefits of the complete unit could be significantly higher.

Tony Levitt continues: “Cut grass that’s left on the ground simply encourages the growth of yet more grass. But if you collect the cuttings at the same time you’ll gradually remove the nitrogen content, so the grass backs off and makes way for wildflowers to come through, especially if the area has been seeded.

“Dead grass that’s simply left to rot can also build up the bank of soil over the years. As a result the water cannot run off the road surface during periods of heavy rain, which is an obvious safety hazard for motorists.

“There’s another potential environmental benefit too, in that grass that’s been cut and collected in late summer and then left to die away over the winter releases methane. This can then be turned into energy, which is already happening in facilities where they know the grass has been properly cut and doesn’t contain any pollutants. So the more we clean up the sides of our biggest and busiest roads, the more usable the grass will become.”

Tony concludes: “With its unique, side-arm concept, the Mulag SB600 cut and collect system is ideally suited to roadside work. Fitted with the new ECO head it can play a key role in promoting biodiversity by helping to establish and maintain ‘corridors’ of wildflowers and encouraging bees, butterflies and other pollinating insects to flourish.”

Under the new contract which begins on 1st April, GVA will be maintaining the verges of motorways and A-roads in National Highways’ Area 10 (covering Merseyside, Cheshire and Greater Manchester), Area 12 (Yorkshire and Humberside), Area 13 (Cumbria) and Area 14 (Northumberland Tyne & Wear, Durham and North Yorkshire).

GVA Commercial Director Luke Kendall adds: “Roadside corridors represent a great opportunity for the conservation and protection of insects. This is an area in which GVA already has extensive experience, not least through our work on a Cumbria Wildlife Trust project that entailed the management of habitats for declining wild bee populations.

“We highlighted our operation of the Mulag cut and collect mowing system in our successful tender to National Highways – the ECO head is a valuable new tool that will further assist us in meeting its biodiversity targets. We look forward to deploying this impressive technology in support not only of National Highways, but also of other customers.”