In many cuisines, okra serves as a master thickener of stews and soups. The goo from that fruit and other plants, such as aloe, cactus and psylium, can also clean water and wastewater of some types of solid pollutants, as well as some that are dissolved. Now, researchers say they have demonstrated that combinations of these food-grade plant extracts can remove microplastics from wastewater.

The researchers presented their results on 22 March at the spring meeting of the American Chemical Society (ACS).

The health effects of ingesting microplastics — tiny pieces of plastic 5 mm or smaller — are currently unclear, but studies suggest that people unintentionally consume tens of thousands of these particles every year. “We think that microplastics by themselves may not be much of a health hazard, but anything that they get into or any type of toxic substance that gets attached to these plastics could go inside our bodies and cause problems,” says Rajani Srinivasan, Ph.D., the principal investigator for the project.

Conventional removal
In the typical wastewater treatment process, microplastics are removed from water in two steps. First, those that float are simply skimmed off the top of the water. However, this step only removes a fraction of the total microplastics that are present. The rest must be removed by adding flocculants, or sticky chemicals that attract microplastics and form large clumps. The clumps then sink to the bottom of the water and can be separated from it.
Srinivasan, who is at Tarleton State University, points out that some of the substances currently used to remove contaminants are potentially harmful, so she and her team have been investigating nontoxic alternatives. For example, one common flocculant, polyacrylamide, can break down into toxic chemicals under certain conditions. “It doesn’t help if we try to clean up water but add potentially toxic substances to remove the pollutants,” she says.

Previously, Srinivasan had studied the use of food-grade plant extracts as nontoxic flocculants to remove textile-based pollutants from wastewater. Her team specifically focused on polysaccharides in the extracts because these biopolymers possess the appropriate chemical and biological properties to attract and capture pollutants like dyes or even bacteria. “I was working with the removal of microorganisms and things like that, and I thought, ‘Why not try microplastics?’” she says.

So, the team of undergraduate and master’s students tested polysaccharide extracts from fenugreek, cactus, aloe vera, okra, tamarind and psyllium — all of which are food-grade materials — as flocculants to capture microplastics. They tested compounds from the individual plants, as well as in different combinations. To do this, they added these extracts to various microplastic-containing water sources. Then, they examined microscope images of the flocculant clumps before and after treatment and counted the microplastics to determine how many particles had been removed.

Importantly, the plant-based flocculants can be implemented in existing water treatment processes. “The whole treatment method with the nontoxic materials uses the same infrastructure,” says Srinivasan. “We don’t have to build something new to incorporate these materials for water treatment purposes.”

Looking forward, she and her team will continue tailoring the ratios and combinations of plant-based flocculants to optimize removal of different microplastic types from a variety of water sources, such as ocean water, estuary water, freshwater and groundwater. They also plan to scale up their nontoxic microplastics removal process in field studies outside of the lab. Ultimately, they hope to commercialize this new, plant-based method so that microplastics can be removed from water on an industrial scale. 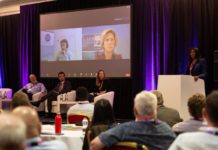 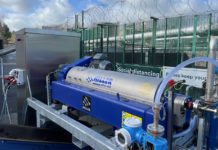