As greenhouse gases (GHGs) bubble up across the Arctic, researchers are trying to identify other trace gases from soil microbes that could shed light on what is occurring in the melting permafrost. 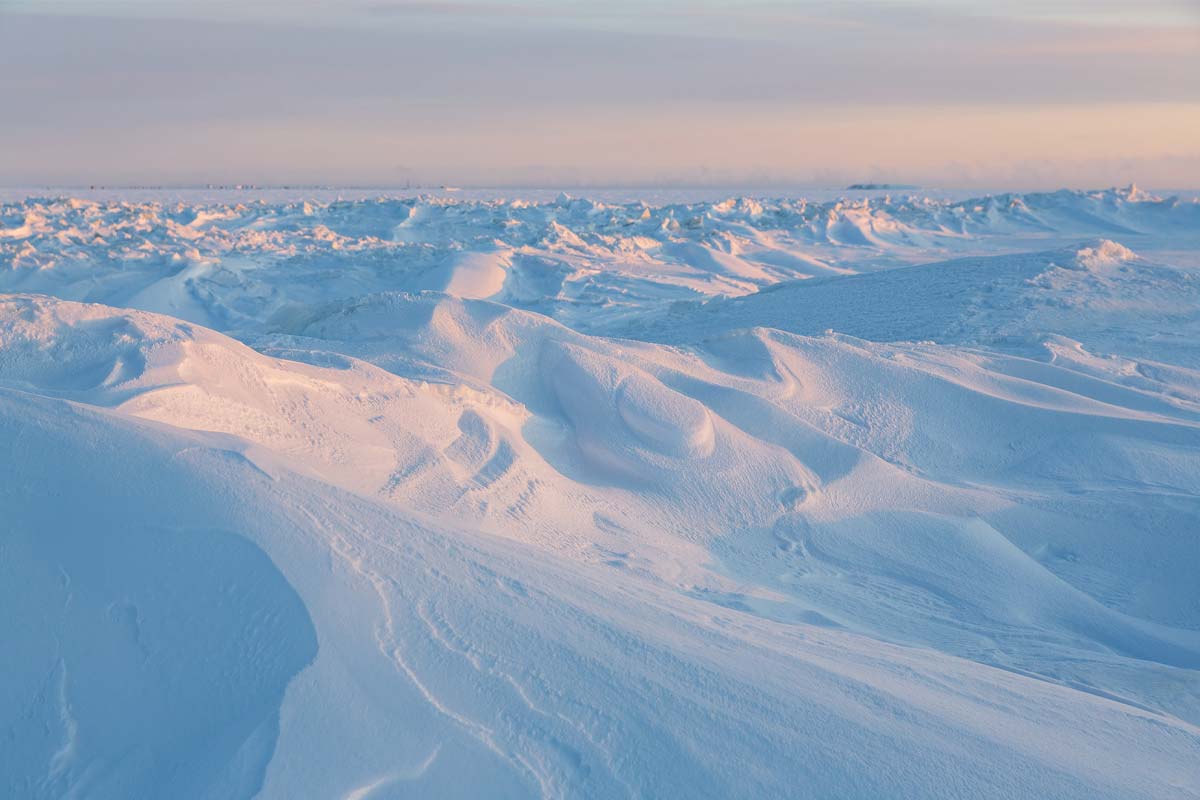 His team is seeking to improve understanding of how much GHGs are being produced by soil microbes, and without destructively sampling permafrost soils. “The goal is to use sensitive gas detection devices to sample microbial volatile compounds coming out with the methane and CO2 gases.”

To measure rates of microbial activity in permafrost soil systems, the team partnered with a University of Alaska, Fairbanks team to collect permafrost samples in late March at two frozen lakes formed from thawing permafrost about 20 minutes north of Fairbanks, Alaska.

They also collected samples this September. Next year, they plan to collect samples from thawing coastal marshlands near Oliktok Point on the North Slope of Alaska.

To collect a soil sample from a lakebed, first a member of the team would put on a harness connected to a rope and walk out onto the frozen lake to clear snow from the frozen lake surface and check for signs of thin ice. Then the researchers prepared the site by using a chainsaw to cut down through three- or four-foot-thick ice to remove huge ice cubes.

The team then positioned one of two coring apparatuses over and around the hole in the ice, Smallwood said. One apparatus provided by scientist Chris Maio, called a hammer corer, collects 3-foot-long samples while another, called a Vibracore sampler, collects deeper samples, up to 13 feet.

The Vibracore drilling apparatus contains a long 3-inch diameter tube that would rapidly vibrate through the lake, down into the lakebed. Using suction the researchers removed 3- to 10-foot-long cylindrical “cores” of lakebed soil containing microbes that have lived there for hundreds to thousands of years.

These core samples were frozen and shipped to New Mexico for Sandia technologists Jenna Schambach and Bryce Ricken to extract microbes, including bacteria and archaea. Archaea are single-celled organisms similar to bacteria, but they have many biological similarities to the nuclei-possessing eukaryotes that comprise multicellular organisms like humans and trees. Many archaea can thrive in extreme environments such as geysers, very salty lakes and sulphurous deep sea vents. Archaea are of particular interest to Smallwood and his team because evidence suggests they are the primary methane producers.

During their March field expedition, the research team also measured GHG emissions from their various field sites. With most of the lake frozen, they didn’t expect to measure much methane. However, at a bore hole site located at the lake rim, they measured methane concentrations of 500-800 ppm, which is roughly 400 times the normal atmospheric level of methane.

The team collected gas from this methane “chimney” and is working with scientists at the University of Colorado, Boulder to determine the age and depth of the carbon being converted into methane by microbes.

The Sandia team is currently conducting laboratory experiments to study microbial populations found in the methane chimney to look for other gases indicative of microbial methane metabolism, Schambach said.

“We believe that we have underestimated the amount of methane released during winter and early spring and that there are likely many more methane chimneys than anyone has considered,” Smallwood said. “It’s a scary thought, imagining hundreds of chimneys pumping out methane at remote Alaska sites. We don’t know how much is really occurring, and that contributes to the uncertainty in our climate models.

Schambach and Ricken are processing lakebed soil samples and dividing them into temperature- and moisture-controlled bioreactors. These containers can simulate what is happening in the thawing-permafrost lake system in the lab.

The researchers will sequence DNA from the samples to identify the types of microorganisms present in different layers of the lakebed before they are grown in the bioreactors. They will also use similar sequencing approaches to track how microbe populations change over time during temperature and nutrient fluctuations. The goal of these experiments is to connect microbes to the release of methane and other volatile gases.

“As we do these evolutions in controlled bioreactors, we will be sampling every so often to characterize how the microbe populations change over time,” said Schambach.

The team will also be measuring what particular microbes are doing in the community by examining the RNA present. This will connect each microbe with an activity and perhaps even suggest which microbes are chiefly responsible for producing methane, and their allies, the microbes that provide vitamins or other indirect assistance to the methane producers.

From the bouquet of a fine wine to the musk of aging compost, the activities of single-celled organisms produce distinct scents caused by a complex mix of gases. Philip Miller, a Sandia biological engineer, is spearheading the analysis of the gas samples collected on the trip to try to tease apart specific gases tied to specific biological activities in thawing permafrost.

During the trip, Smallwood’s team collected gas samples in small adsorption tubes. Miller compared these tubes to chemical sponges, able to “suck up” a lot of interesting gases without taking up a lot of space. Miller is beginning to see what kinds of gases they collected using a two-dimensional gas chromatograph with mass spectrometry.

“The name of the game for biomarker hunting of volatile compounds is separation,” he said. “The second gas chromatography column allows for better separation of gases that have similar chemical backgrounds. We’re able to see more, and it becomes easier to identify gases of interest. It’s a starting point on understanding if we can use a similar tool to monitor a fragile ecosystem over a long period of time.”