British Camp reservoir, located in the picturesque Malvern Hills, was the focus of valve repair work recently undertaken by ECS Engineering Services. Carried out on behalf of Severn Trent Water, the challenging project was completed by a team of expert divers, which fitted a new winch to allow manual actuation of a critical flap valve at the base of the draw-off tower. 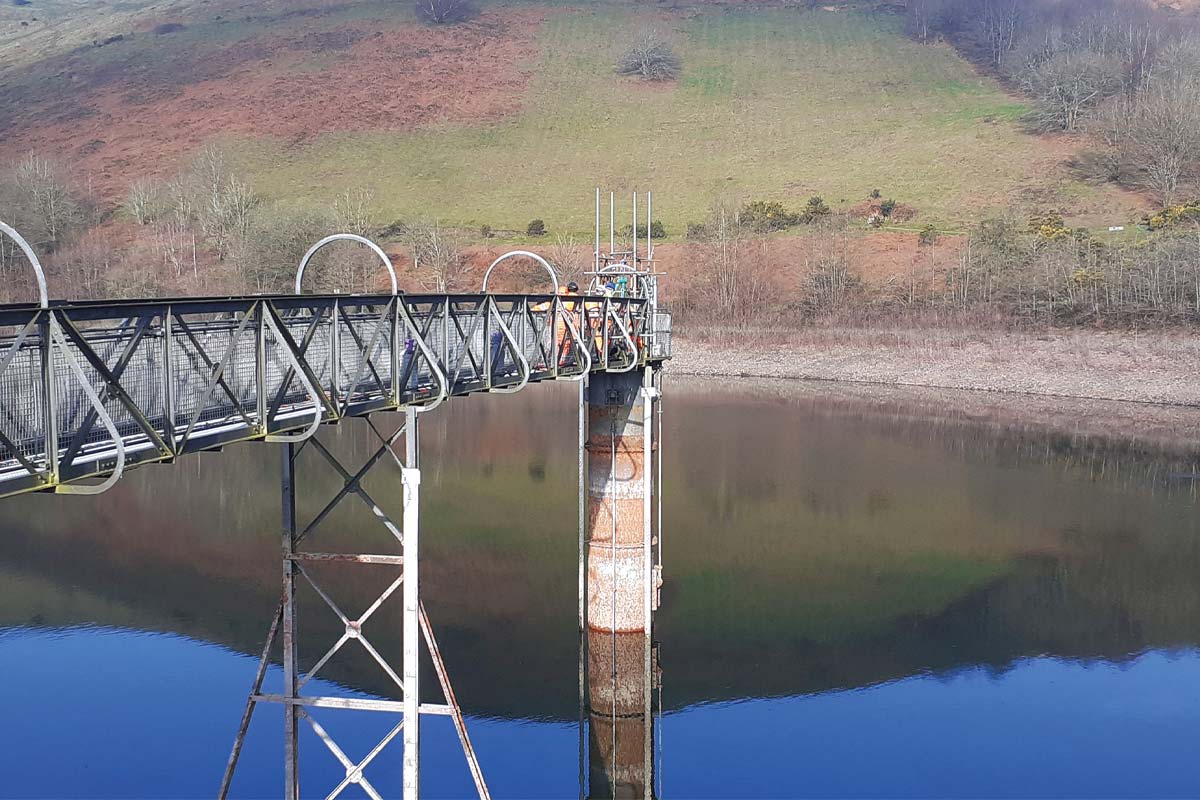 Electro-mechanical engineering services provider ECS is an appointed Severn Trent Water framework contractor. The firm was recently tasked with assessing the condition of multiple valves at British Camp reservoir. As part of a wider Critical Valves Scheme, the majority of the valves at the site were low risk investigations, but there was one notable exception.

“We needed to repair the flap valve at the bottom of the draw-off tower, which helps drain the reservoir. The valve is underwater and is operated via a winch. However, the original winch was in a state of disrepair. We needed to install a new winch connected to the valve in this hard-to-reach area, which would allow it to be opened and closed manually,” says Steve Crapper, Precontracts Director at ECS.

The plan was to enter the inside of the tower from the top and attach a new winch rope via a deflector pulley onto the existing flap valve. This would involve dive teams completing the work underwater.

In advance, an ECS team installed a new davit winch at the top of the tower to connect to the flap valve. To ensure the divers would be able to access the valve, ECS submitted a design for a scaffold erected on the top of the tower, which would provide an anchor point for the winch on the diver’s bosun’s chair, as well as the back-up winch. The scaffold was approved by all involved in the project, with Severn Trent Water confirming it was suitable for the tower. ECS then completed the installation of the scaffolding on site.

Work on the valve could now begin in earnest. ECS submitted a risk assessment and method statement (RAMS) for a five-man dive team to safely enter the tower. One man would be lowered down inside, while the remaining four would provide support for emergency recovery, air supply and winch operation. To ensure the repair went as smoothly as possible, the dive team carried out a dummy run beforehand.

With everyone happy to proceed, the repair began. Managed and supervised by ECS, a diver was lowered 11 m down the central shaft of the tower and into the water, then travelled another 12 m underwater to reach the valve. Once in position, the diver fitted a fabricated deflector pulley to the hinge side of the flap valve. This was achieved by drilling and tapping the 16 mm fixings into the wall of the tower with a pneumatic drill. With this complete, the dive team provided ECS with video evidence of the successful repair, confirming the successful pulley installation and connection.

Repairs finished, the scaffold was dismantled and video evidence of the fully functioning valve shared with Severn Trent Water. The work underwater had been completed in three days and to a high safety standard.

“While this was a challenging repair, we are used to managing dive teams for water infrastructure projects,” Steve says. “Throughout this project, our dedicated ECS supervisor ensured that all aspects of the project were carried out to the scope of the RAMS submitted, resulting in a safe and methodical approach throughout.”