Each of our digital activities comes with an ecological cost – and we perhaps shouldn’t discount those carried out under the blue glare of the chirpy bird icon.

A new study conducted by Greenly – a Paris-based firm with a professed interest in measuring the carbon footprint of companies and events – has examined the carbon footprint of Twitter, it says, by taking into account the energy consumed by a smartphone, the impact of requests and data packets being handled by servers, as well as the impact of information being exchanged over social media. Initially estimated in 2010 by an unnamed Twitter employee to be around 0.02g CO2-equivalent (CO2e), subsequent research by numerous climate experts appears to put the ecological impact of a single tweet to be 0.026g CO2e.

In order to measure Twitter’s ecological footprint, Greenly says it accounted for the average number of tweets published per day (867 million), amounting to an estimated 316 billion tweets annually. Based on their calculation that a single tweet emits 0.026g in CO2-equivalent emissions, Twitter annual footprint amounts to 8,200 tons in CO2e emissions, the equivalent of 4,685 flights flying between Paris and New York.

Most of these emissions come from the electricity consumed in Twitter’s data centers, located in countries where electricity generation is still heavily dependent on fossil fuels.

A truly equal ‘town square’?
According to Greenly CEO Alexis Normand: “Obviously, a tweet sent out by Elon Musk for instance, would not have the same carbon footprint as one sent out by a random Twitter user. This is because the number of followers vary from one account to another. Therefore, it remains fairly difficult to quantify the precise annual carbon footprint of every account, but we can supply a fairly representative estimate of reality through this study.” 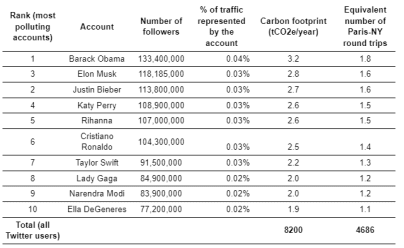 Currently, Twitter has 486 million active users, averaging 700 followers each. According to an estimate carried out by the climate tech Greenly, the 10 most-followed accounts on Twitter themselves account for 22.5 tons of CO2e emissions, 0.26% of Twitter’s total ecological footprint. This is equivalent to 13 flights between Paris and New York, or the annual per capita carbon footprint humans must reach by 2050 in line with established carbon neutrality objectives. Former US President Barack Obama (133.2m), Twitter CEO Elon Musk (118.8m) head the list of most followed accounts, closely followed by Canadian pop star Justin Bieber, Portuguese football player Cristiano Ronaldo and American comedian Ellen DeGeneres.

From an environmental standpoint, tweets themselves do not majorly contribute to Twitter’s ecological footprint, says Greenly; it is rather the number of followers a given account can bring together. Beyond purchasing Twitter, Elon Musk has repeatedly voiced his ambition to create a super application named X in the next three years, standing to further increase photo and video content traffic on the internet. “It is entirely possible that carbon emissions only skyrocket further””, indicates Tommy Catherine, expert at Greenly’s Carbon Institute..

The IT sector accounts for 5% of global carbon emissions, composed of product manufacturing (66%), network traffic (19%) and data centers (15%). In order to reduce its carbon footprint, Twitter can seek to decrease the number and power of its vCPU instances and relocate data centers to countries where electricity generation is less carbon-intensive. This applies to all social network operators, which must prioritize moving data centers to countries generating electricity using renewable energy. Although Twitter’s carbon footprint remains far lower than other Internet giants such as TikTok, Meta (Facebook, Instagram and Pinterest), Snapchat and Reddit, Musk’s social network uses a mere 10% of its total energy from renewable sources;