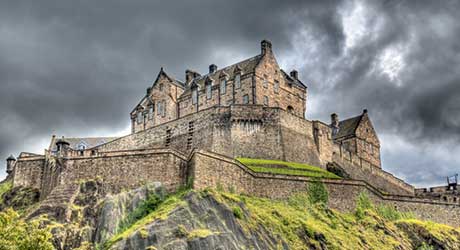 THE drive to reduce carbon emissions at Scotland’s top visitor attraction is well ahead of target.
New figures show that Edinburgh Castle, which attracts more than a million visitors a year and accounts for nearly a third of all Historic Scotland’s energy consumption, reduced its carbon footprint by 18% in 2011/12, exceeding the target of 10%.
The cut also represents a major cost saving, with last year’s bill of £291,000 down from £400,000 in the baseline year of 2008/9. The drop of 27% was achieved despite rising fuel costs, two colder than average winters, and increased visitor numbers.
Ewan Hyslop, head of sustainability, research and technical education at the Scottish Government agency, said: “This remarkable reduction has been achieved through a multi-faceted approach that involved upgrades to boilers, an improved building energy management system, enhanced lighting controls, and better insulation.
“However, these cuts are very much our first steps. The real challenge will be maintaining them consistently, year-on-year, particularly in light of the more extreme weather we’ve been experiencing in recent years, which can have a dramatic effect on energy consumption.”
Energy use at Edinburgh Castle is sufficient to power around 300 homes.