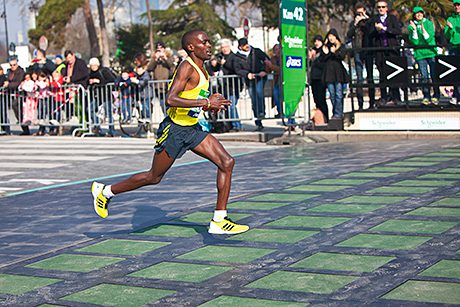 PAVEGEN has had the largest ever installation of its energy-harvesting pavement tiles at the 2013 Paris Marathon.

Commissioned by French energy specialists Schneider Electric, lead sponsor of the race, the London based company installed 176 energy-harvesting tiles, including a 25-square metre span at the climax of the race on the Champs Elysée, where 22-year old Kenyan Peter Some crossed the finishing line first (pictured).
Available since late 2011 and billed as “a low carbon solution that aims to bring kinetic energy harvesting to the streets,” the Pavegen tiles convert the energy from footfalls into electricity. Each tile flexes by 5 mm when stepped on, producing up to 8 watts of kinetic energy which is harvested and stored in lithium polymer batteries. The energy is then available to power nearby systems such as street lighting, alarms and information kiosks. Other Pavegen installation sites include West Ham tube station in London and three UK schools. One made up of 12 tiles was deployed at the 2012 Olympics.