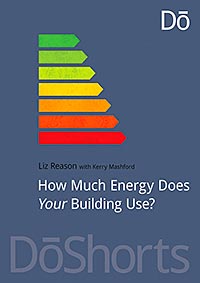 THIS book is primarily aimed at those in the property and construction sectors, a contribution to boosting energy- and carbon-literacy for those who find the subject confusing. And that appears to mean: Everyone, pretty much.

The picture developed by NEF director and author Liz Reason over the first half of How Much Energy Does Your Building Use? is one of a dysfunctional construction sector characterised by a lack of cooperation between the various players involved in the making of buildings. The use of outdated and inadequate benchmarking and reporting methods is also rife. And the buildings that gain awards and prestige – even for things like sustainability – are seldom those which actually perform well in this regard, or which are comfortable for their occupants.
In this climate, the attempt to produce or maintain energy and carbon efficient buildings looks hopeless. Or is it?
The second half of the book starts with the question (and chapter heading) “Where do we go from here?”. It begins by insisting that you CAN get improved energy performance for your buildings, and goes onto outline ten steps to apply. These include ensuring everyone on the team talks a common language, whether you are about to build a new building, or to lease, rent or refurbish an existing building.
Another tip: Do the sums. Calculate how much energy you are actually using. Part of the problem lies with the regulatory modelling tools, which often hinder rather than help. Part L of the Building Regulations sets standards for space and water heating and fixed lighting but excludes equipment and appliances and plugged-in lighting. The result: Designers are lulled into the false sense that they have calculated the predicted energy use accurately when they have actually omitted big contributors.

The book devotes a large section to the apparent reasons for the ‘performance gap’, the widespread and often dramatic disparity between a building’s rated energy performance at the design stage and how it actually performs in practice.
An example given is Portcullis House, commissioned in 1992 to house 213 Westminster MPs and staff. It was initially said to have a BREEAM rating of ‘excellent’, and to be designed with low energy usage in mind. Its later Display Energy Certificate (DEC) rating of ‘G’ indicated the less palatable reality, although subsequent energy management measures have helped boost it to ‘E’.
Designing and producing buildings is very complex, involving so many different specialists, few of whom seem to be singing off the same hymn sheet. Building control specialists tend to rely on visual inspection of work without understanding the energy impacts. Architects are more likely to be experts in aesthetics than energy issues. And even where they are on the right track, their best intentions can be derailed by others. The authors mention the notorious ‘walkie-talkie’ building in Fenchurch St in the City of London, whose concave profile channelled the sun’s rays into a concentrated beam that could fry an egg. ‘Death ray’ designer Rafael Viñoly later complained that his original design had featured horizontal sun louvres on the south-facing facade, features later sacrificed in a cost-cutting measure.
My initial fears that the book would be a dry and technical read – an early chapter provides an intimidating list of statutory and voluntary standards for buildings – proved to be unfounded. The story developed over the 99 pages of How Much Energy Does Your Building Use? not only appeared to be as thorough as one would expect of such well-credentialed authors – Reason’s co-author Kerry Mashford is a chartered engineer and chief executive of the NEF – but was also full of real-life examples that brought the discussion to life. A compelling picture of the challenges in this area.
• How Much Energy Does Your Building Use? (£30) is in the DoShorts collection of books, available at www.dosustainability.com