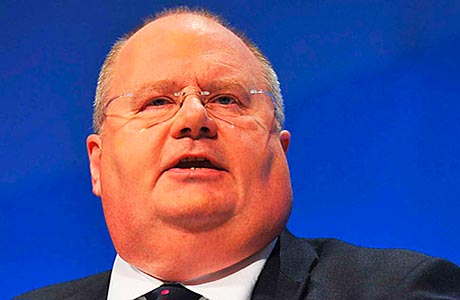 A combative Q&A session followed Eric Pickles presentation to the RWM show at the Birmingham NEC on 17 September.

The Secretary of State for Communities and local Government presented a ministerial keynote titled “Delivering comprehensive waste collections for local taxpayers”. The audience appeared to comprise representatives from local authorities, as well as sectors like waste and environmental consultancy.

His opening remarks highlighted waste collection as the most visible of all public services. He lauded developments introduced by his own administration, and the growing recognition that, where waste collection is concerned, “the public sector can work with the private without losing sovereignty”.

He derided the previous government’s decision to move from weekly to fortnightly public collections “with no mandate”. During its tenure in government, bin collection became secondary to achieving “arbitrary goals”, he said, such as meeting targets in relation to energy reduction and climate change. It was a time, he said, when the legal obligation to collect household rubbish was “covertly watered down”.

Also reprehensible, he suggested, was the focus on catching out homeowners who were not properly complying with instructions about putting their bins out at the right time and so on, in some cases spying on them.

The speech reiterated his commitment to weekly refuse collections, and his belief that this is what the public wants. One audience member addressed his department’s “bribe to local authorities to go back to weekly collections” – a move he believed had been widely condemned. He asked: “So how it is you know better than us – who are in regular contact with our residents – what it is they want?”

He responded that one council leader had approached him at a reception in Downing Street to ask ‘what are you banging on about weekly collections for? We’ve trained the electorate’ away from them. “I’m not in the business of training the electorate,” he said, “but to give them what they want.” Responding to further sounds of audience dissent he said: “Do a survey!”

When the session chair, CIWM president Steve Lee, appeared to be about to ask for a show of hands from the audience, to indicate whether people believed weekly collections were the way to reduce costs for council waste collection, Pickles objected that the chair was trying to advance his own agenda, and quickly gestured towards another raised hand in the audience.

The Q&A session appeared to grow increasingly combative. “At what point are you going to make the leap from seeing waste as something to be buried and burnt, towards a circular economy?” asked a representative from SLR Consulting.

Pickles said he was “really keen” on recycling, citing great examples he had seen, including mechanical separation of material from the kerbside, and initiatives to recycle cooking oil.

When asked why recycling rates in England appear to be stalling, he blamed factors such as the multiplicity of different-coloured bins people have to use. “I’m a big fan of one bin,” he said. Later he added: “I look to the sector and local authorities to bring an increasing degree of rationalisation. But I hope we can bring the public with us, not treat them like naughty children.”

Other questioners were brushed aside. “Do you not have a duty to taxpayers that resources are conserved for the future?” Pickles: “Yes. Next question.”