Scotland’s AD industry has mushroomed by more than two thirds in a year, new figures show.
Twenty seven AD projects are up and running in Scotland, up 69% (from 16) from 12 months ago, while a further 43 have planning approval. 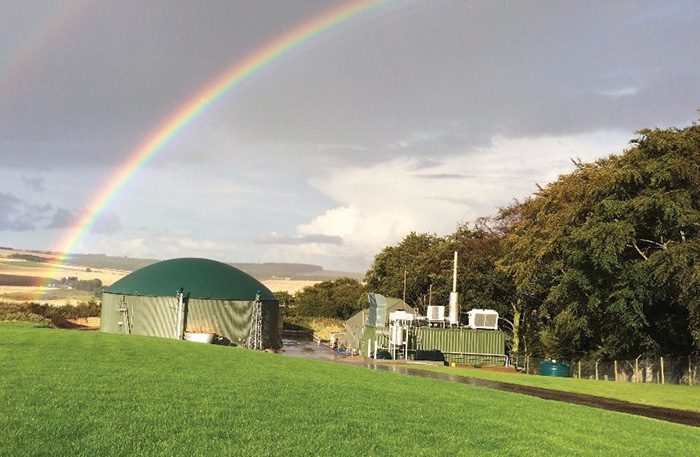 With a dozen more plants waiting for permission to go ahead, the sector could grow by more than 200% in the next two years, figures from the Anaerobic Digestion and Bioresources Association (ADBA) show.
Increased numbers of household food waste collections under by the Waste (Scotland) Regulations 2012 mean more will become available to fuel Scotland’s ongoing AD boom. Charlotte Morton, Chief Executive of ADBA, said: “Scotland is leading the way in demonstrating how [ AD ] extracts value from our waste, while supporting farming resilience, reducing billions in carbon abatement costs, improving food security and production and generating employment and investment opportunities for rural economies.
One recent project is BioGask, based at Gask Farm near Turriff, Aberdeenshire, uses an anaerobic digestion system to dispose of food waste and slurries for commercial customers. Currently, pig slurry and meat processing waste are fed into a 2,500 cubic metre tank at the facility (pictured, above).