Describing your technology as “a slurry tank with a lid on” is unlikely to win any marketing awards, but with nine successful farm-based AD plants in the UK and a new worldwide patent, Fre-energy’s simple grit-removal system could make it the must-have agricultural installation, according to chopper pumps and process equipment manufacturer Landia.

By preventing the gradual accumulation of silt in the digester, Fre-energy has ensured that farmers benefit from having the full volume of their digester sustained at optimum operation. Grit, sand, ash, soil, glass, metal and other inorganic contaminants from the tank do not enter the process.

Yhis has proved especially advantageous when using chicken litter as a feedstock, which typically has very high levels of grit. The capability to extract grit and silt also extends to root crops, food waste, slurry from cattle bedded on ash, sand and other high grit inputs.

In short, there is never a need to stop the digester to empty it, says Landia, so it also avoids downtime and the health and safety risks associated with the opening of the tank.

Big numbers tend to dominate renewables headlines, with seemingly the more megawatts being generated the better, says Landia. But you won’t find Fre-energy’s name in those news-grabbing figures.

Instead, for Welsh organic dairy farmer Richard Tomlinson, his goal when seeking to introduce AD to generate all of his heating and electricity was to complement his farms’ organic milk production – not to create a rural power station. He sought “true sustainability”, according to the firm.

Under the umbrella of Fre-energy (Farm Renewable Environmental Energy), Tomlinson’s closing of the loop comes in the shape of nine seemingly extremely efficient AD plants that support the core business of farming. 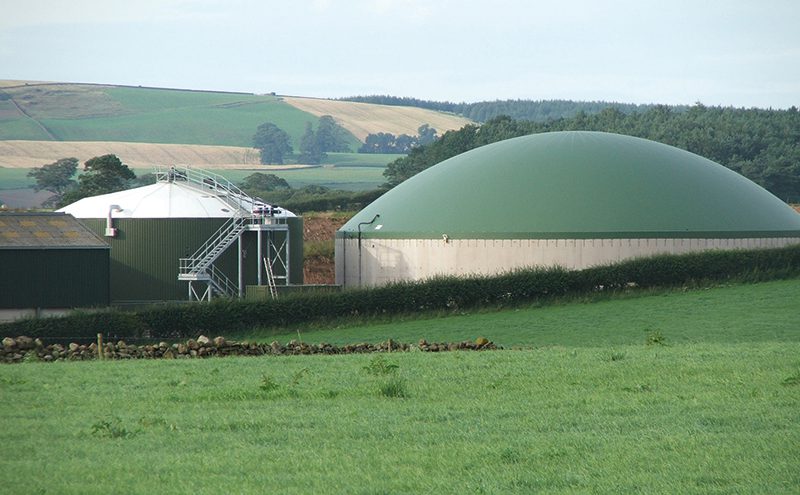 The company’s de-gritting technology is complemented by Landia’s pasteurization and pumping equipment, said to be highly reliable. As Landia puts it, combined with dynamic organic waste management and a very efficient slurry management system, the results make a very convincing case for any dairy farmer with over 300 cows to introduce an AD plant as the key to sustaining their business – particularly in rural settings.

In the international market, with so many small farms working together with a centralized AD plant, the Fre-energy model with its very low energy usage, is hard to beat.

Not so bothered about FITs
Fre-energy’s Technical Director Chris Morris said: “In the UK, FITS (Feed-in-Tariffs) is not our driver. We see the electricity, heat and fertiliser we produce as natural fit by-products that whilst not making headline figures, are now an integral part of our sustainable business”.

At Lodge Farm in Wrexham, Wales, the first of the nine Fre-Energy sites, a new separate lagoon was constructed within the larger storage lagoon in order to store the slurry and pump it underground to the digester half a mile away on a fortnightly basis. This not only ensured that slurry would be delivered to the digester as fresh as possible, but provided a clean and convenient solution, rather than transporting the slurry across the land or by road.

In the reception pits at Lodge Farm, two Landia long shaft chopper pumps (7.5kW) with integral mixing nozzles chop and blend the tank’s contents; initially processing 25 tonnes of slurry per day from the organic dairy herd, as well as chicken litter (6 tonnes per day) before pumping the liquid into the 1000m3 digester.

Each Landia pump is designed with a knife system that prevents breakdowns by being able to deal with higher dry matter content such as straw, commonly found in liquid manure.

Material treated by the pasteuriser
In 2015 Lodge Farm became a licenced food waste site. Now, in addition to the farm wastes, materials from local food manufacturers and a nearby hotel is first treated by a 5m3 Landia pasteurizer (hygienisation unit) tank that conforms with ABP (animal by-products) regulations.

Designed with an integral heating jacket and an externally mounted side-entry propeller mixer and chopper pump to reduce particle sizes, the pasteurizer heats the liquid to the required 72˚C for one-hour batch processes.

There are no moving parts inside the pasteurizer, so there is no need to enter the tank to carry out maintenance. There is also a 7.5kW Landia submersible mixer (300rpm) in Fre-Energy’s post-digestion store.

“Despite the high dry matter content, the Landia equipment works very well”, added Fre-energy’s Chris Morris. “It’s simple, modular and it does the job, especially the ABP-approved pasteurizer, which is recognised by Natural Resource Wales and State Vet as a quality piece of kit. We like the side-entry mixer because it is both the manway and the mixer, reducing costs because only one aperture is required, rather than two.

“None of the Landia equipment requires intervention from us. It passes the test every time and very much fits in with what we do. Our AD process with our patented de-gritting system is also low on energy use. Our digester is mixed using less than 7kW of pump capacity – running at only 30% duty – so only 2kW of mixing energy is required for our 1000m3 digester”.

He continued: “I also like the fact that Landia are a long way removed from pump salesmen who’d worry about getting their shoes covered in mud at a farm. Landia understand what we and farming are about – and when necessary won’t hesitate to roll up their sleeves to help us”.

Based on the results in Wrexham, Landia’s pumps and mixers now feature strongly in Fre-energy’s nine-strong and expanding network of successful farm-based AD plants.

Top quality digestate is also a fundamental part of the Lodge Farm ethos. The digestate goes through a separator and then stored in a lagoon (that has 6 month storage capacity) before being spread onto grassland.

The solid digestate, which contains a higher proportion of the phosphate and potash, is transported by road to land used for growing winter crops to feed the dairy herd.

Trials conducted by Bangor University have demonstrated that the BOD (biological oxygen demand) of the digestate is reduced by up to 90%, representing a substantial benefit to the environment. It also has around 80% less odour than typical cow slurry, thus making the spreading of manures far more socially acceptable.

The commitment to the closed loop system begins right at the entry gates to Lodge Farm, which are powered by the AD outputs. Here in this part of North Wales there is conclusive proof that investing in AD will reduce your carbon footprint and drive agriculture forward.

Kilowatts might not make the same eye-catching headlines as megawatts, but the simple yet highly effective solutions in Wrexham are true next generation agriculture that sets a great example. 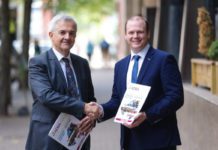