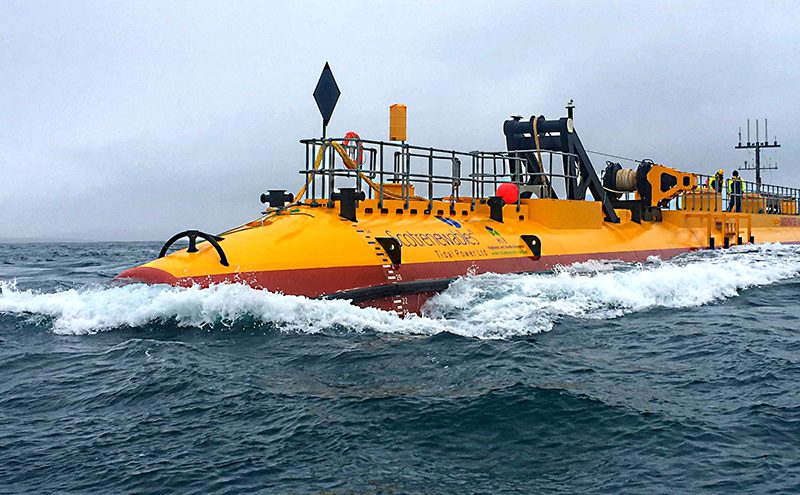 The firm Scotrenewables Tidal Power has set a record with its first 2MW floating tidal stream turbine with the unit clocking up over 3GWh of renewable electricity in its first year of testing at the European Marine Energy Centre (EMEC) in Orkney, Scotland.

In 12 months of continuous operation, including during the worst winter storms in recent years, the pioneering SR2000 – the world’s most powerful operating tidal stream turbine – has supplied the equivalent annual electricity demand of around 830 UK households and at times has been supplying over 25% of the electricity demand of the Orkney Islands.

Underlining the significance of the company’s achievement, and its contribution to the progress of the tidal industry, the 3GWh generated by the SR2000 over the past 12 months is more power than that generated by the entire wave and tidal energy sectors in Scotland in the twelve years prior to the launch of the SR2000 in 2016.

The team at Scotrenewables believes that this, combined with Meygen’s generation of over 8GWh over the past year from four tidal turbines deployed in the Pentland Firth, is convincing evidence of tidal power’s market readiness.

Andrew Scott, Chief Executive Officer of Scotrenewables Tidal Power said: “The SR2000’s phenomenal performance has set a new benchmark for the tidal industry. Despite being an R&D project, and it being our first full scale turbine, its first year of testing has delivered a performance level approaching that of widely deployed mature renewable technologies”.

“The ability to easily access the SR2000 for routine maintenance has been a significant factor in our ability to generate electricity at such levels over the past 12 months, including over winter. In addition, accessing the SR2000 using “RIBs” and other similar types of low-cost vessel means that our operating costs and outage times are kept to a minimum.”

With support from the EU’s Horizon 2020 scheme, Scotrenewables Tidal Power is planning to start the build of a 2MW commercial production unit later in the year which will also go to Orkney for testing before the company targets sales of the turbine.

Andrew Scott added: “The SR2000 has completed the job of demonstrating that we have a breakthrough technology and we will now be shifting all our focus and resources towards building on that success with a product which we are confident can enable a new industry created around a predictable renewable energy source.”

Commenting on UK government policy, Andrew Scott said: “We are dismayed that there is a total lack of market support here in the UK for our technology, and we have no option but to focus our business on overseas opportunities.”

In May 2018, a report from the Offshore Renewable Energy Catapult said that the tidal stream industry could generate a net cumulative benefit to the UK of £1,400m, including considerable exports, and support 4,000 jobs by 2030.

“Scotland’s remarkable marine energy resource has placed us front and centre in developing this industry with global potential.

“Scotrenewables’ technology has generated more power in its first year than Scotland’s entire wave and tidal sector produced before it. This remarkable achievement paves the way for marine energy to become a mainstream part of Scotland’s energy mix while cutting carbon, and delivering jobs and investment to our remote communities.

“To keep driving progress it’s critical that both Scottish and UK governments recognise the potential of these technologies and work with industry to fully commercialise these innovations.”