Particulate matter (PM) emissions from exhausts have been successfully brought under control by regulation, but it now seems we’ve allowed non-exhaust emissions (NEE) to grow into a serious problem. NEE are those arising from the abrasive action of tyres and brake discs, as well as what is whipped up from the road surface by passing traffic. It’s an emissions source that is entirely unregulated and seemingly poorly understood, although new and increasingly alarming data seems to be coming in all the time. Envirotec writes

When it comes to minimising road transport’s impact on the environment, an enduring theme seems to be: Fix one thing and another problem pops up elsewhere (maybe even because of one of these so-called solutions). We’ve seen it with the shift to diesel cars in the 1990s: It was better for CO2 emissions, but the elevated NO2 emissions led to what is now a public health crisis in many European cities, which it seemed no one had foreseen.

Similarly, just as legislators might view the steady drop in PM emissions from exhausts as a cause for celebration, it now seems that we’ve been wrong to neglect NEE – the PM produced by things like tyres and brake discs.

And it’s not just PM that’s the problem – tyres, for example, are also believed to be one of the biggest contributors to microplastic pollution in the marine environment. They also account for a proportion of atmospheric metal emissions – notably copper and zinc.

How big a problem?

A July 2019 report (“Non-Exhaust Emissions from Road Traffic”) from the the Air Quality Expert Group (AQEG) – an expert committee that reports to DEFRA – cited estimates predicting that the contribution of NEE will grow “from less than 8% of national [PM] emissions in 2017 to 10% in 2030.” The same report also recommended “as an immediate priority that NEE are recognised as a source of ambient concentrations of PM, even for vehicles with zero exhaust emissions of particles.”

NEE is now believed to constitute the principal source of primary PM from road transport, contributing 60% of PM2.5 and 73% of PM10, according to estimates from the UK National  Atmospheric Emissions Inventory, an amount that seems set to increase steadily (see graph, below). But it seems a far more challenging emissions source to track and understand, compared to exhausts. How much of it comes from tyres, compared to brake discs, for example?

The AQEG report said the magnitudes of the various contributors are currently “highly uncertain” and are believed to vary greatly depending on the brake, tyre and road-surface materials. An outdated system of measuring NEE isn’t helping matters – with the industry still dependent on emission factors dating from the 1990s, which don’t take account of the many changes since then with vehicle design and technology.

The same report said that “brake, tyre and road-surface wear contribute approximately equally to UK sources of NEE”, and most of it comes from cars (the more prevalent form of road transport, with which the greatest distances are travelled), and about half of it is produced in urban areas where drivers use their brakes more frequently.

It seems likely the PM from brakes will diminish as a problem, with the uptake of regenerative braking, now a standard fixture on today’s electric vehicles, for instance. But the PM from tyres is expected to get worse with the adoption of EVs, given the larger weight needed by the latter to accommodate the battery and powertrain. Will these two competing factors balance out, to some extent? This was a point on which the AQEG report said more research was needed.

A study published on 29 January 2020 by the benchmarking organisation Emission Analytics (“Tyres Not Tailpipe”) provided estimates of the quantities of PM produced by tyres that suggest it is a far more serious problem than previously assumed.

The group began by formulating a hypothetical figure for mass loss from tyres. It was assumed that an average tyre might shed an estimated 1.5kgs over a 30,000km life. Over a 320-km test this equates to a mass loss of 16g. Quadrupling the figure – to account for the four tyres – and dividing by 320 gives a theoretical mass loss per kilometre of 0.2g, which is 22 times greater than what is currently permitted by the regulations for exhausts (4.5mg/km).

But when the group came to perform real-world tests, the results appeared to be something of a shock. Driving a 2011 VW Golf 320kms at high speeds around a test track resulted in a measured mass loss of 1,844g, or 5.8g per km. In other words, 29 times worse than the hypothetical figure. Compared to regulated exhaust emission limits of 4.5mg/km, the test suggested NEE is around one thousand times worse.

Admittedly, the group had sought to test a “worst-case” scenario, based around the cheapest tyres, with the car heavily ballasted, on an average surface-quality track, and driving at high speeds with frequent cornering. Yet the real world might not be so different, they suggested, since many people drive with tyres that are often underinflated, while the test used tyres inflated to precisely the correct level. Also, many countries have poor road surfaces, and budget tyres are a frequent resort of the cash-strapped consumer.

One objection to the study’s validity, which the group anticipates in its report, is that when tyres crumble and disintegrate in contact with the road, it is mostly large chunks that fall off, which immediately drop to the ground, unlike the ultrafine particles produced by exhausts, which remain in the air and contribute to atmospheric pollution.

The report conceded that, indeed, most of the emitted tyre mass was at the top end of the measured size range (PM10 or up to 10,000nm), while tailpipe particles are mostly below 100nm in size. However, said the report, “the tyre wear emissions also included a high number of particles down to 10µm, as a result of
volatilisation of the tyre material due to heat in the tyres.”

The report concluded: “The challenge to the industry and regulators is an almost complete black hole of consumer information, undone by frankly out of date regulations still preoccupied with exhaust emissions.” While tyre emissions are unregulated at the moment, the report’s authors greatly doubted this situation would continue.

Making it go away

Traffic management might seem to offer the most effective mitigation strategies for tackling NEE, at present, suggested the AQEG report, and measures such as reducing the overall volume of traffic, lowering the speed where traffic is free-flowing, and encouraging drivers to ease off on braking and high-speed cornering.

And the NEE contributed by particles lying on the road surface – and whipped up into the air by passing traffic – could be tackled by reducing the amount of material deposited on roads by vehicles passing in and out of construction and waste management sites. Also, measures like road sweeping and applying dust suppressants to street surfaces are another option, although it said “the impacts on airborne PM from trials of these latter approaches have so far proven inconsistent and any benefits have been short-lived.”

Also, as mentioned, regenerative braking promises to reduce brake-wear emissions – since it doesn’t depend on frictional contact between materials. Other technological mitigation methods suggested by the AQEG – though they are “as yet unproven” – include trapping brake-wear particles before they can be emitted and “mandating  formulation  of  low-wear/low-emission tyres, brake pads and road surfaces.”

A London start-up firm has in recent months announced a prototype system which it claims can collect 60% of airborne tyre particles, before they enter the atmosphere. The system from The Tyre Collective – a spin-out from Imperial College – uses electrostatics, seemingly running on similar principles to the systems that have been used to collect particles from industrial chimney flues.

The system is fitted behind each wheel, and can go “anywhere in the region of the wheel arch”, according to founder Hugo Richardson. The assembly has been designed to ensure the airflow will entrain particles into the collection system, says the firm, taking advantage of upward cavity flow and Magnus effects, and drawing on expertise in aeronautical engineering.

In conventional electrostatic particle-collection systems, there will normally be two separate charging plates – one to charge the particles and the other to collect them. Somewhat fortuitously, as Richardson recalls:  “We noted with our test vehicle that the particles that come off are positively charged,” and this meant it was possible to design the system with just a single array of charged plates. It also means it can operate at much lower voltages, he said.

The system also departs from the traditional approach to particle collection – which tries to collect particles that have already been dispersed in the air – by collecting them effectively at source. The prototype uses copper coils for the charge collection, but alternative materials are also being explored.

In its present form the system can be retro-fitted to existing cars. The Tyre Collective has been speaking with engineers at car firms, as well as groups like Transport for London, to better understand the specifics of the application.

The collected particles can be recycled – and the infrastructure and technology to do this is being developed widely. He said sub-50µm particles, for example, could be used in applications like rear tyre walls (realising a closed loop economic model), and the carbon black used in pigments and dyes (such as used to form the words on the page you are currently reading).

The Tyre Collective’s work is still at a very early stage, but a patent has been filed. Work so far has been partly funded by the Royal Commission for the Exhibition of 1851.

A more immediate priority in the quest to reduce NEEs is to get a clearer picture of the problem, and AQEG’s report said it was important to “work towards a consistent approach internationally for measurement of NEE and to update and narrow the uncertainties in their emission factors.” And this kind of work “could form the basis for subsequently including criteria on brake  and  tyre  wear emissions in future type approvals and regulations governing formulation.” 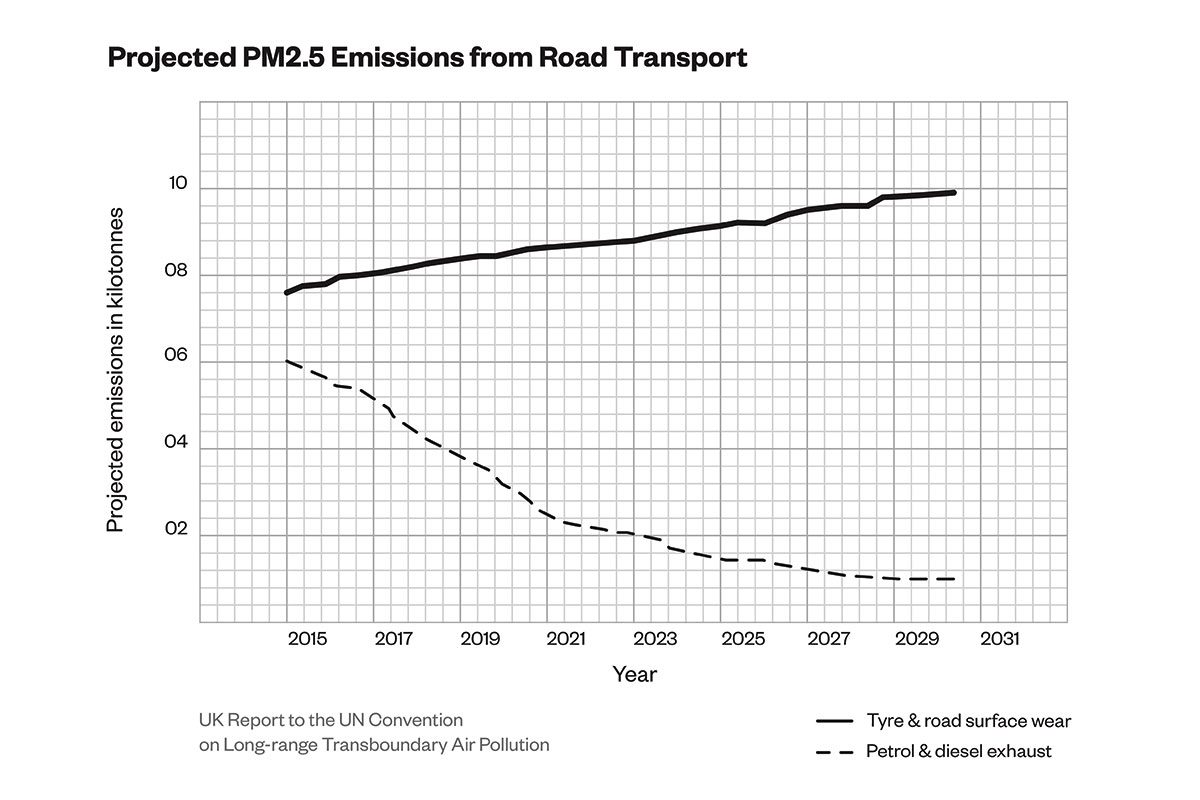 While we are still awaiting a clear picture of NEEs and their environmental impact, there is at least quite a lot of research establishing the health dangers presented by PM. Studies link levels of inhalable particles (PM10) and fine particles (PM2.5) from pollution to cardiovascular and respiratory death rates.

Microplastics, on the other hand, is still a more undeveloped area. What are the consequences of eating microplastics? This is still far from understood. What seems to have surprised many is the extent to which the microplastics from car tyres contribute to marine pollution, a discovery that seems to have provided Richardson with the initial spark of interest to begin the work of The Tyre Collective.

One recent study conducted by the San Francisco Estuary Institute, and published in October, described as “the most comprehensive study to date on microplastics in California”, found that over 7 trillion pieces of microplastic find their way into San Francisco Bay every year, with car tyres contributing more than 300 times as much as more well-known culprits such as microfibres from polyester clothes and microbeads from personal care products. Given the apparent scope and scale of the problem, it seems likely that it won’t remain unlegislated for much longer.