With an increasing variety of gas detection technologies in the market, matching technology to application has never been more important. Alphasense is a UK based company whose expertise and in-house capabilities have made it a trusted go-to for OEM developers of gas monitoring instruments. Alphasense’s position as a global leader in gas sensing technology has been placed on a firmer footing recently, says the company, which is in a period of renewed focus and investment, following its acquisition in November by US multinational AMETEK, which has seen Alphasense’s facility in Braintree, Essex designated as its “Global Centre of Excellence for Sensor Technology”.

The need to protect workers and infrastructure through use of gas detection systems has long been appreciated in industrial environments like oil refineries and chemical plants and the sector has been something of a proving ground for electronic gas sensing technology in recent decades. And the price and performance of devices is following a trajectory which is putting technology in the hands of those who most need it. As the world becomes more mindful of air pollution too, the appetite for low-cost, high-accuracy devices is growing, as is the variance in the performance and accuracy of devices and their suitability for air quality applications.

Certainly, in the case of the industrial safety market, the safety critical nature of the application and associated standards such as ATEX provide a guarantor of a requisite performance level. And while the ethos of “you get what you pay for” remains relevant, it’s clear, certainly in the case of portable gas detection, that devices are becoming more affordable. A standard four-gas instrument (O2, CO, H2S, LEL) which going back a couple of decades may have cost £1000+ is now available for a few hundred pounds. This reduction in instrument cost, as well as extended product life and reduced maintenance requirements have helped broaden the demographic of users.

If you look back 20 years, industrial gas monitoring was typically employed in the more obvious places like oil refineries and chemical plants, as the firm’s Will Parrett explains. “Now, you’re as likely to see a telecoms engineer or lone worker with a personal gas monitor,” he says. Reliable gas detection is critical for someone digging trenches for instance, where the usual rules governing confined spaces require increased vigilance regarding gas leaks – an end user application in which many of the sensors Alphasense produces find themselves.

Unfortunately, it usually takes a tragic incident, or a series of them, to drive awareness and expectations. As protection becomes more affordable and standards are raised, industries with perhaps less obvious risks are becoming better equipped. Whilst this is still lacking in many applications, it is on the rise in industries such as agriculture, refrigeration and utilities.
Accidents still happen all too frequently, especially in the developing world where serious incidents, particularly involving sewer gas, are still an unhappy commonplace. Sadly fatal incidents still happen in places like the UK too.

Critical gases which are commonly monitored include hydrogen sulphide (H2S), carbon monoxide (CO), oxygen, as well as the presence of flammable gases (for which devices are typically calibrated against methane). Aside from these four, typically featured in a standard four-gas device, many specific industries and applications require additional sensors, for example, ammonia, frequently used in agricultural and refrigeration, or chlorine, prevalent in the water industry and more recently seeing increased usage for sanitisation.

The need for protection from toxic, asphyxiant and flammable gases still seems underappreciated given the accidents that continue to occur all too frequently. As always, the key risk with dangerous gases is that they are silent and typically without odour, often leading incidents to result in multiple deaths. Every loss of life further justifies the efforts of Alphasense’s team of researchers, scientists and engineers to continue to drive innovation and empower instrument OEMs to produce smaller, more affordable devices through the medium of enhanced sensor technology.

The industrial safety sector was Alphasense’s core market when the company began 25 years ago and is still core to their business. “It’s now at a place where reliable, low maintenance and long-life devices have become extremely affordable” says Will Parrett, Alphasense’s Sales and Marketing Director EMEA.

Two of the biggest selling devices in the Industrial Safety sector are the single-gas H2S monitor, used widely in the Oil & Gas sector and the aforementioned four-gas device, now in use across a wide variety of sectors with a smaller cost differential, increasingly being provided to workers in lieu of a single-gas device. Whilst in many respects similar to the type of electrochemical sensor which goes in a £20 domestic Carbon Monoxide (CO) monitor, industrial electrochemical sensors differentiate themselves through their performance characteristics, accuracy and reliability in harsh environments.

The nature of gas detection means that some gases require specific detection techniques, leading multi-gas instruments to often feature PID, catalytic and NDIR sensors alongside their electrochemical counterparts – and these technologies have all been growth areas for Alphasense. 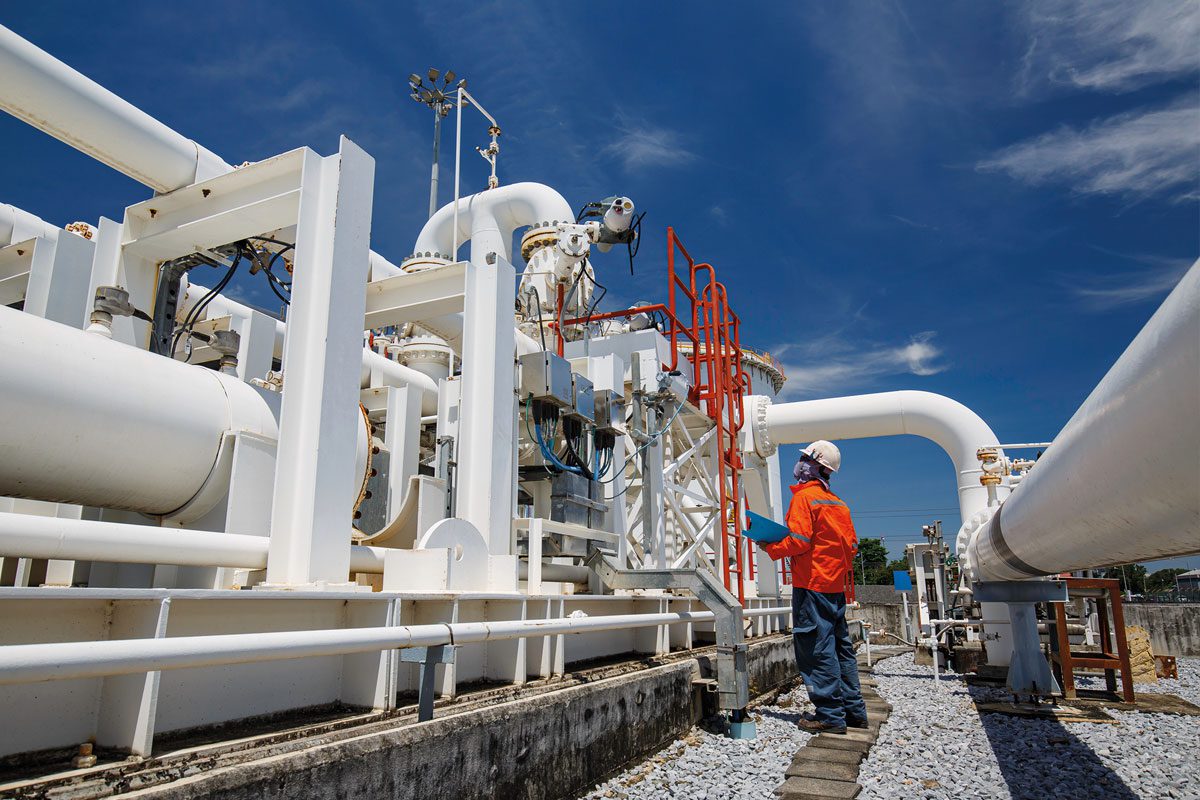 Industrial gas detection is a mature market, says Parrett, and one which continues to expand as devices become cheaper at the compliance end of the market and smarter at the top end. “As a component supplier, we get to see the full spectrum, from OEMs who are stripping their devices back to basics with a focus on functionality, cost and battery life for low-cost markets, to those who are driving advances such as connectivity which is opening up new opportunities and allowing end users to use their devices in ways they haven’t before”.

Parrett, who joined Alphasense having previously been a customer of theirs during his time in the Gas Safety Instrument world is open minded about where technology may take the industry, commenting that “I have worked in confined spaces myself and I know how reliant end users are on our technologies and how important it is that we continue to innovate”. He added: “When I was on the instrument side of the industry I learnt that major end users were relying on Davy Lamps for detecting flammable gases as recently as the mid 90’s – quite astonishing when we look at what our OEM customers are developing now.”

“It’s exciting that we can now influence where the next 25 years will take us”. By the same token, the ‘technology’ used in the Davy Lamp (essentially relying on the user to identify the intensity of the flame within to determine the presence of flammables gases) was commonplace in industry 180 years after its conception, something which could well be true of electrochemical sensors as they continue to develop and find new applications. Aside from their Industrial Gas Safety business, Alphasense are the market leaders in the supply of sensors specific to the Air Quality Sector, a growing niche in the sensor world. Electrochemical sensors are at the core of the AQ sector and in the same way that Domestic Safety and Industrial Gas Safety Sensors differ, those used in the AQ world take a further step forward in the technology stakes. We will cover Alphasenses involvement in the Air Quality sector further in the next issue.

With increasingly critical decisions reliant upon gas and particulate monitoring, the appetite for electronic gas sensing is growing. For Alphasense, this is a journey which began in 1996 and culminated in 2021 with its 25-year anniversary and transition from a family-owned business to one operating within a US multinational, following its purchase in November by AMETEK.

AMETEK is a global manufacturer of instruments and electromechanical components with a turnover exceeding £5.5 billion. Alphasense sits within the AMETEK MOCON business unit which with many synergies and its own expertise in PID gas detection strengthens Alphasense’s position in the market and expands its global product offering. Alphasense operates out of its site in Braintree, Essex, a location which has been designated AMETEK MOCONS Global Centre of Excellence for Sensor Technology. The transition has seen increased investment in R&D, a renewed focus on product development and the creation of over 30 new jobs in Essex since the acquisition in November 2021.

For both Alphasense and its customers, Parrett believes the benefits of the acquisition are numerous, and says the acquisition has reinforced Alphasense’s brand values of innovation and quality. “The transition has seen us embrace positive change and we are emerging with a more focused product roadmap, an increased marketing presence and most importantly investment in customer services. The future could not be brighter for Alphasense, our customers and the industries we serve,” he says.