A team of researchers from Imperial College London has been working with Diamond Light Source, the UK’s national synchrotron, on a new TiO2/Fe2O3 nanomaterial combining photocatalytic oxidation with adsorption, which they say allows a one-step treatment of water contaminated with arsenic.

Over 50 million people in South Asia are exposed to groundwater contaminated with carcinogenic arsenic.  The team’s results were recently published in Results in Surfaces and Interfaces. The paper also mentioned that the versality of Diamond’s B18 beamline allowed them to perform x-ray absorption spectroscopy on their samples and compare the results with their predictive models.

The researchers already have a patent for this material for arsenic decontamination and they hope that the new material might be incorporated into a filtration column for everyday use in affected households, as this cheap and efficient technology could improve the quality of water for millions of people.

First author of the publication, Dr Jay Bullen said: “These experiments allowed us to directly investigate the structure of the surface complexes formed when arsenic binds to  our TiO2/Fe2O3 nanomaterial. We were able to conclude that the surface complexes we had chosen for our predictive surface complexation model, using pure titania and pure iron oxide reference materials, were appropriate. However, we also saw some tridentate As-Fe2O3 bonding in the EXAFS data that wasn’t included within our earlier model. We were also able to confirm surface precipitation of As(III) at low pH, which our model had predicted.”

Arsenic is a famously toxic element and long-term exposure to even trace amounts can lead to debilitating and potentially fatal diseases including skin cancer, lung cancer, keratosis, and neurological disorders. 100-200 million people globally are believed to be exposed to arsenic through contaminated groundwater drinking supplies. Water multi-step treatments to remove arsenic already exist, using filtration (adsorption), but this process requires pre-treatment (oxidation) to be efficient .

Dr Jay Bullen continues: “We wanted to better understand the nature of arsenic adsorbed onto this composite TiO2/Fe2O3 nanomaterial; to understand whether arsenic binds in the same way as onto pure TiO2 and pure Fe2O3 minerals. X-ray Absorption Spectroscopy (XAS) is the perfect way to do this, with EXAFS revealing information about the local environment of arsenic atoms, e.g. how many covalent bonds arsenic forms with the TiO2/Fe2O3 surface. The beamtime grant we received allowed us to realise these experiments at Diamond Lightsource.”

Arsenic can be found in several forms in water including arsenite and arsenate. Arsenite (i.e. As(III)) ions are difficult to remove from contaminated water using conventional treatments such as adsorption or coagulation-flocculation due to its neutral charge (H3AsO3). In contrast, arsenate (i.e. As(V)) ions (HAsO42- and H2AsO4–) are both (i) more easily adsorbed and (ii) less toxic than H3AsO3. Consequently, the treatment of As(III)-contaminated water benefits from the oxidation of As(III) to As(V) prior to its removal via adsorption. Oxidation of As(III) can be achieved using heterogeneous photocatalysts, such as TiO2, and ultraviolet (UV) radiation. However, other materials such as iron oxides (Fe2O3) are more efficient for adsorption. Therefore multiple-step treatment plants are currently used but their design and maintenance  is challenging.

This difficulty may be overcome by incorporating photocatalytic and adsorption capabilities into a single material. Previous studies by the same group showed that composite materials combining the excellent photocatalytic capabilities of TiO2 with the high As(V) adsorption capacities of iron oxides (Fe2O3) were good candidates for efficient decontamination.  The authors subsequently developed a surface complexation model (SCM) to predict changes in the amount of arsenic adsorbed and its speciation as a function of experimental variables such as pH. However, the authors wanted to verify that the structures of the adsorbed arsenic surface complexes chosen for the model were realistic, so they used spectroscopic techniques. X-ray absorption spectroscopy played a key role thanks to its element selectivity, its capability to discriminate As oxidation state (XANES) and to identify the structure of the As complexes adsorbed on the TiO2/Fe2O3 surface (EXAFS).

From a model to an application

The team used B18 to realise their experiments.  At the beamline, they were able to record EXAFS spectra of solid samples to determine how many covalent bonds arsenic forms with the surface of the materials, and XANES spectra of aqueous suspensions to measure photooxidation kinetics. 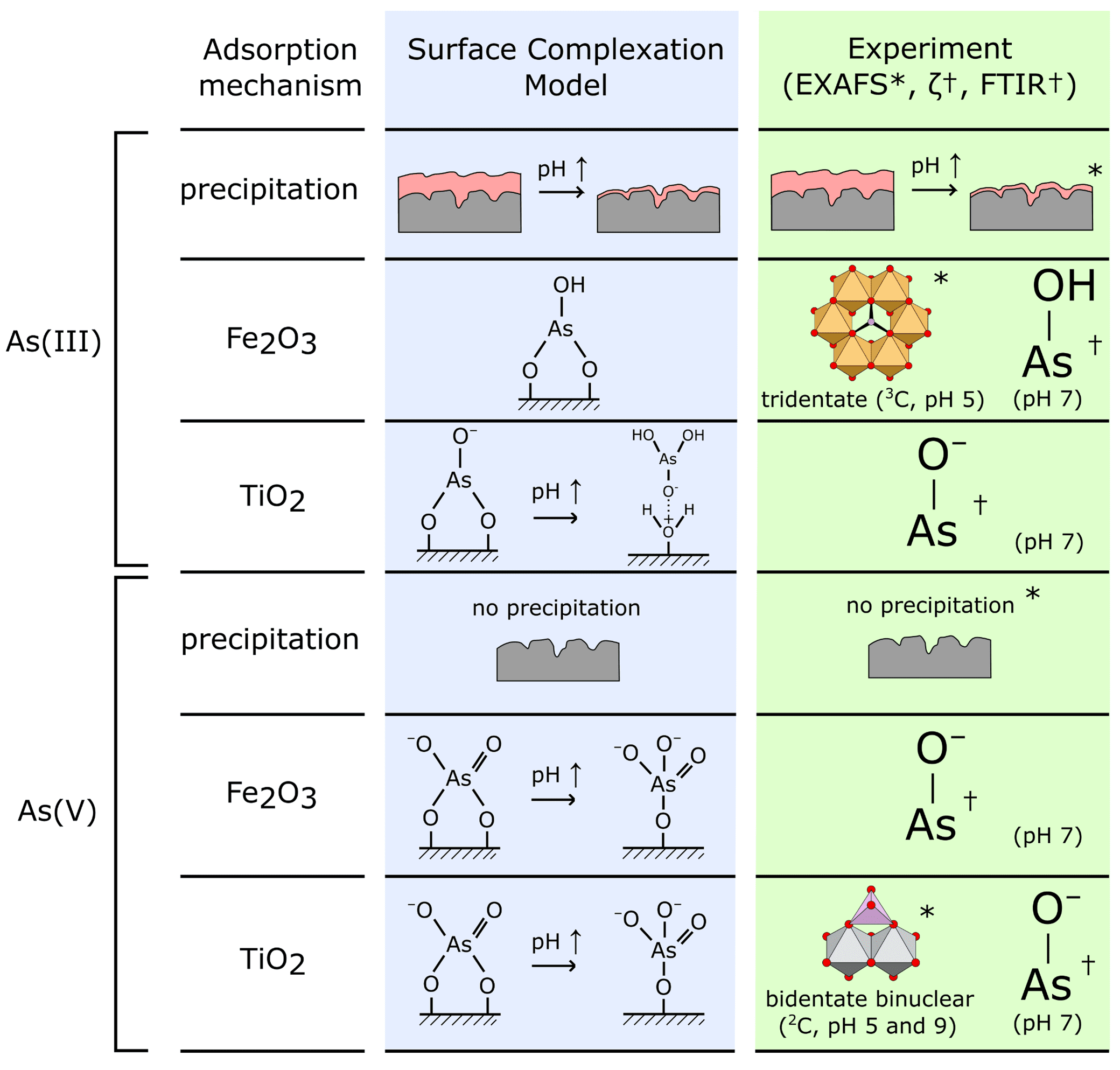 The authors combined spectroscopic data obtained at Diamond Lightsource (EXAFS) with FTIR and zeta potential measurements at Imperial College London to develop a picture of the dominant surface complexes formed when arsenic is adsorbed by TiO2/Fe2O3 composite nanomaterials. This was used to evaluate and verify the speciation of adsorbed arsenic predicted by the authors’ previous Surface Complexation Model (SCM), a theoretical model that is able to predict changes in adsorption as a function of environmental conditions. This model had been developed using surface complexes chosen based on data for pure titania and pure iron oxides, with experimental evidence for arsenic speciation on composite TiO2/Fe2O3 not being available prior to the Diamond Lightsource study.Arrows indicate where the pH is increased from 5 to 9. Asterixes (*) and daggers † indicate evidence gained by EXAFS and FTIR/zeta potential analysis respectively.