Paul Barter of Hydro International looks at the positive impact that phosphate reduction in sewage discharge has had on the ecology of the UK’s East Anglian Broads. He considers how the achievements in managing eutrophication, and understanding its complex causes, have implications for other wetlands in the UK and Europe 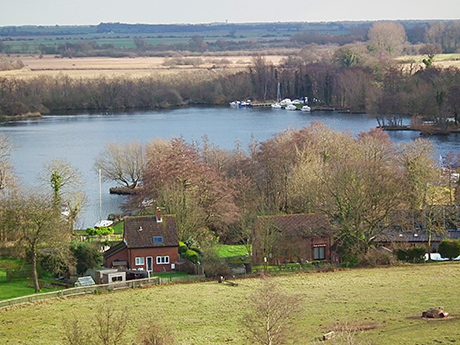 IT wasn’t until the 1960s that Victorian theories about the Broads’ creation through mass peat cutting in the 13th and 14th centuries were generally accepted.

By carving out shallow lakes, and connecting them to the meandering rivers with a system of dykes, the cutters created the basis for today’s much-loved landscape and Britain’s largest protected wetland.
In common with many European wetland areas, managing the Broads is about achieving an acceptable ecological balance between human impact and reclamation by nature. But in the last 50 years, the accelerating effects of modern agricultural practice and population growth introduced changes which threaten the equilibrium.
An increase in soluble phosphate load from sewage treatment outfalls was first identified as having an impact on the Broads’ fragile ecosystem as long ago as the 1970s and was leading to wide-scale eutrophication. Attempts to remove phosphates continued until, in the late 1990s, a project employing DynaSand® sand filtration technology from Hydro showed a significant impact. Extended to several treatment works in the area, after ten or so years the project resulted in lowering of the total phosphorus content of the waterways by 90%, compared to the 1970s, and proved hugely successful in eliminating eutrophication when combined with other management practices.

A complex habitat
The area of the Broads, mostly in Norfolk, comprises over 300 sq.km and 40 or so lakes, with over 200 km of linking waterways. Although several major rivers flow through the area, the flat nature of the topography and the proximity of the sea and its tides means that flushing through is slow. The network of dykes used to access and drain the land also attenuate the flow, as have the tidal locks and sea water defences over the centuries.
Long after peat cutting stopped, small-scale agriculture, fishing and reed harvesting for thatch and horse bedding shaped the ecology of the Broads. This habitat has provided a waterbird and insect paradise for which the whole area is much treasured.

Rapid change
But in the 1960s and 70s, it became apparent that the habitat of the Broads was changing drastically and rapidly. Disturbing signs included increasing areas suffering toxic algal blooms, with high BOD and loss of indicator flora species due to eutrophication.
Sedimentation also occurred as a result of algal build-up, with shallowing of major open water and dykes which had the knock-on effect of even slower water movement. Accelerating settlement was accompanied by water heating resulting in less oxygen for sustaining macrophyte, invertebrate and vertebrate diversity.
The principal cause of this increased eutrophication was identified as effluent from domestic sewage, with phosphate being a specific factor. In addition, East Anglia had become a major arable agricultural producer and, since the 1950s, farmers had turned to Nitrogen Phosphate Potassium (NPK) chemical fertilisers to promote intensive cereal growing in the vicinity of the Broads.
Other factors identified included the changes in Broads management practice. As reed cutting declined, reed beds increased in area, encouraging stagnation and siltation and reed management skills also started to decline. Dykes fell into disuse which accelerated the stagnation.

Study for improvement
To try to remedy the situation, a key area for study was Barton Broad, probably the largest open water area at c.70 hectares. As well as providing a home for turbid water, algal blooms and reduced plant and animal diversity, Barton’s decreasing depth made it almost unavailable for the popular leisure activity of boating and sailing, despite the River Ant running through the Broad.
As an identifiable point source of pollution, sewage treatment works were assessed as contributing between 60% and 80% of the phosphate loading into the local rivers, such as the Ant and the Bure. Isolated communities not on main sewerage were also possible sources of more diffuse pollution, as was agriculture.
Phil Ginn, Anglian Water’s Service Delivery Scientist for Norfolk explains: “The drivers for the phosphate removal in the 1990s were the Broads Directive and the Habitat Directive. Now the Broads are part of the National Environment Programme, and are identified for improvement as part of the River Basin Management Plan under the EU Water Framework Directive. We work closely with the Environment Agency on this.”

Phosphates reduced
To reduce phosphate additions in the discharge to water courses from sewage treatment works, the sewage is treated with iron salts, which are converted to insoluble ferric phosphate; the phosphate is removed by the DynaSand® vertical sand filters, settled in primary settlement tanks, further treated and used on farmland. DynaSand® filters from Hydro International are widely used for ammonia and denitrification duties in water treatment across the UK.
Hydro installed DynaSand® filters in 1997 to achieve rapid, high volume treatment, initially at Anglian Water’s Stalham Sewage Treatment Works which discharges into the Ant at 60 litres/sec (consent maximum 76 l/sec), and later at other STWs around the area.
Jamie Pizey is the Treatment Manager responsible for Stalham and other treatment works in the Norfolk area. “The vertical sand filters are designed to provide final removal of suspended and other solids as a tertiary polishing treatment,” he says. “The filters also provide a convenient point for rapid ferric sulphate treatment.
“Ferric sulphate solution is injected into the vertical sand filter and rapidly converted to phosphate which is removed with the other solids. The solids are concentrated through a Lamella Plate Clarifier from Hydro and reintroduced to the primary treatment and sludge settlement stage; the lamella concentration process is also employed at the other plants with sand filters. It is ultimately removed with the sludge for agriculture.”
“Phosphate is measured as total phosphorus mg/litre. Discharge levels had been in the 5-12mg/litre range before treatment started at Stalham. Its consent for discharge is a maximum 1mg/litre, and we now achieve an average of 0.4mg/litre.”

Further steps
The introduction of phosphate stripping using vertical sand filters has resulted in lowering of the total phosphorus content of the waterways by 90%, compared to the 1970s. In addition, changing farming practices in East Anglia, with a more balanced approach to cereal production than spreading large quantities of costly chemical fertilisers, has helped reduce other sources of diffuse loading.
Despite this, in the 2000s, Barton Broad remained turbid and still bore the signs of extensive eutrophication.
At this time, the complex role of sediment in holding and releasing phosphates was being investigated. From this, it was decided that, although mass suction dredging to remove sediments could cause temporary release of phosphates, where there was sufficient river flow through the broad, such as Barton, released phosphate would be flushed out.
As a result of suction dredging of large areas of Barton Broad, a relatively rapid recovery has occurred in its ecosystem. The recovered sediments were spread on agricultural land well away from the water, and provided enriching mulches for farmers.
Other trials by Anglian Water have included the re-introduction of managed reedbeds, e.g. at Freethorpe, which have been shown to have a role in phosphate removal as well as in ammonia reduction. At Freethorpe, the reeds are unsuitable for thatch, so are burnt on site for potash enrichment of the reed rhizomes, elsewhere, suitable reeds may be harvested for thatch.

Biosphere improvements
RBS surveys on the nearby Sutton Fen Broad have shown some recovery in indicator species like the willow warbler. The diversity at this broad demonstrates what the area could be like including some 14 important rare plant species, for example, the Fen Orchid at Sutton with some 250 plants is about half the UK population. Eighteen birds and animal species and nearly 150 insect species have been recorded there; over 1500 invertebrate species have been noted in the last 100 years or so.
“However, we are aware of only some of the factors involved in maintaining the status quo.
Understanding what are attributable to biosphere management and what are part of natural fluctuations, reduced eutrophication, or other broader changes is complex,” adds Phil Ginn.
Jamie Pizey concludes: “The DynaSand® vertical sand filter tertiary treatment has proved to be extremely effective in removing a prime source of phosphate. It’s also a trouble-free and easy to maintain solution. The sand filter and ferric sulphate approach enables us to control the principle source of eutrophication, and enable other measures to add their effect.
“There are possibilities of extending the existing phosphate stripping to other treatment plants across the area to increase the benefits. Management of the Broads over the last 20 or so years has been carefully observed. Our observations and conclusions could hold lessons for other wetlands which are affected by human encroachment; the Somerset levels are one example. However, we are aware we do not have the complete picture and we are still learning lessons about the complex influences on fragile ecologies like the Broads.”